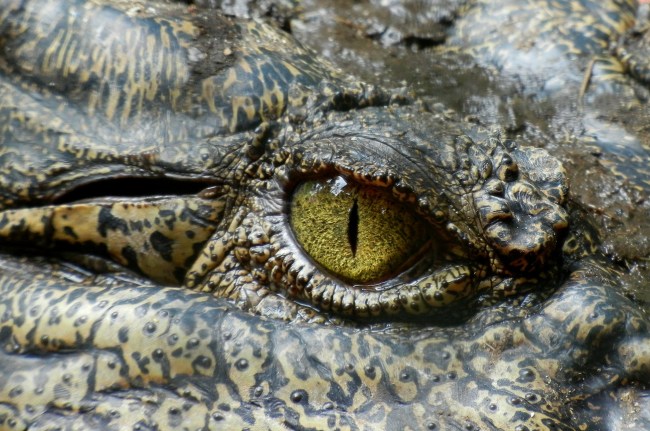 There’s so much going on here I’m not quite sure where to begin but I’ll start by saying that I am straight-up alarmed that this didn’t happen in Australia. If this was an episode of Who Wants To Be A Millionaire and someone called me with the ‘phone a friend’ lifeline I would’ve said this went down in Australia with 100% confidence.

Alas, this was a couple of guys out fishing for sharks off the beach in South Africa and they had the lights on and cameras rolling when a dinosaur-sized crocodile came lumbering out of the water and attacked the one dude’s truck. If you have the sound on you’ll hear the fog lights on the truck get shattered as the crocodile takes a bite out of the truck as if it’s defending the land from the metal invader.

This video was part of a longer ‘gone fishing’ segment that was filmed by 32-year-old Zak Faurie-Williams in South Africa. The full clip is 18-minutes long and you can see them catching sharks throughout the video. But the bit with the massive saltwater crocodile takes place around the 13-minute mark and I’ve set the video to begin at that moment but just in case it doesn’t that’s where you should skip ahead to.

I guess they were fishing for Grey Sharks when a storm picked up so they hopped in the truck and that’s when they spotted the crocodile. They told Mirror they phoned the anti-poaching squad to come and rescue the crocodile and the plan was to chill there until the rescuers arrived but the croc wasn’t having any of that truck’s lights.

What’s wild is how they use kayaks to paddle out their baits and then they kill the lights in the truck so that crocodile could’ve easily pounced on them in the kayaks at any moment and this could’ve been a VERY different story. Thankfully, it just ended with some busted fog lights and not a fatal injury.