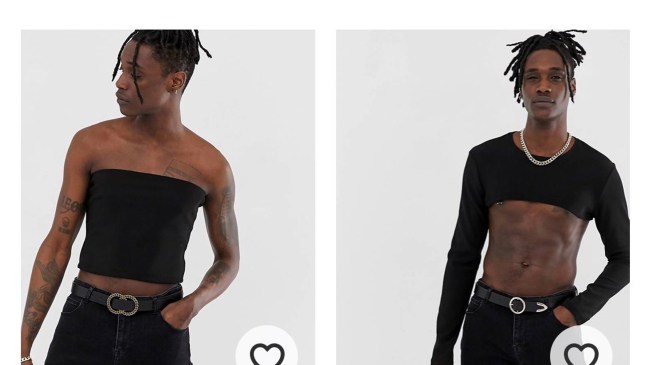 Are you getting your summer wardrobe assembled for plenty of house parties, music festivals and days at the beach? Have you added a crop top to your fashion arsenal? How about a tube top? No? ASOS says the bold summer trend of guys wearing crop tops is in fashion this summer and there is a history of guys rocking them.

I give up. @ASOS #WTF pic.twitter.com/lBuyPHousn

The internet had reactions about the crop tops for men and the dude tubes.

If my fella walked in wearing that he'd not be long getting walked back out..!! 🤮🤢 pic.twitter.com/kcJUWJVb15

men who wear crop tops have my full respect

The official Twitter account for ASOS joined the conversation by saying: “Proudly breaking down fashion norms since 2000.”

However, guys have been rocking the crop top for decades. Will Smith wore a belly shirt in The Fresh Prince of Bel-Air in the 90s, Johnny Depp wore a crop top in A Nightmare on Elm Street in the 80s, Apollo Creed AKA Carl Weathers wore one in Rocky IV, Alex Winter wore one in Bill & Ted’s Excellent Adventure and Alex Winter Prince wore crop tops numerous times.

If Will Smith could wear a crop top as a boy in 1990/91 so can you pic.twitter.com/KCMFerXxRT

johnny depp in a crop top is my favorite pic.twitter.com/2ATJ2p3lfm

Y'all sleep, if APOLLO CREED can wear a crop top, its on the approved list. pic.twitter.com/Y8vupPzVDP

I hope that the new Bill and Ted movie will mean a resurgence in crop tops for men because it is a WHOLE VIBE pic.twitter.com/bPW3IEPlql

prince was also a male crop top pioneer and don't you forget it pic.twitter.com/QWbDixS8Zj

And Winnie-the-Pooh has been wearing a red crop top since 1932, but unlike Pooh Bear, you should wear pants because you’re not an anthropomorphic cartoon teddy bear and you could get arrested if you don’t.

So maybe this is just a resurgeance of the crop top from years ago since fashion trends always come back into style.