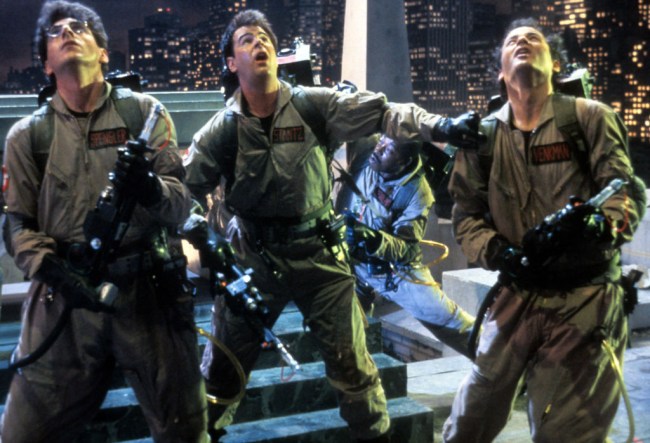 The boys are back! Dan Aykroyd is getting the band back together for the upcoming Ghostbusters movie. The entire original ghost-catching parapsychologists will be reunited for Ghostbusters 2020, even Bill Murray!

But in a new interview, Aykroyd confirmed that Murray would be back as the beloved Peter Venkman. Aykroyd appeared on The Greg Hill Show on Boston sports radio station WEEI and announced the fantastic news.

Aykroyd was asked if he still talks to Bill Murray. “We were on set together this autumn, and, oh it was so much fun,” Aykroyd said of being on the set of the new Ghostbusters with Bill Murray. “The Murraycane is so much fun.”

Besides Aykroyd as Raymond Stantz, the new Ghostbusters will star the original cast members Ernie Hudson, Sigourney Weaver, and Annie Potts. Sadly, Harold Ramis won’t reprise his role as Egon Spengler, who passed away on February 24, 2014. You likely won’t see Rick Moranis as Louis Tully since he hasn’t acted in anything for the last 13 years.

“We’ve got some really terrific young actors. A great story, a great setting, it’s gonna be scary. It’s going to be thought-provoking, it’s going to be very heartfelt,” Aykroyd said of the Ghostbusters reboot.

The upcoming Ghostbusters movie will be written and directed by Oscar-winning Juno director Jason Reitman, who is the son of the original Ghostbusters director Ivan Reitman.

Some of the “terrific young actors” that Akyroyd mentioned include 12-year-old Mckenna Grace from Captain Marvel and Finn Wolfhard AKA Mike Wheeler from Stranger Things.

Wolfhard’s Canadian four-piece band Calpurnia that formed in 2017 has split up. “It’s bittersweet to share this news, but we want to let you know that our time playing together as Calpurnia has come to an end,” the band said in a statement. “We are extremely grateful for the support we’ve received over the past few years. What seemed to us like an unimaginable reality came to be, and we have been thrilled to share the ride with you.”

The film will also star Carrie Coon from The Leftovers as Wolfhard’s mother. Paul Rudd will be playing a teacher in the movie.

When Aykroyd was asked about Blues Brothers going over their budget and the actor who played Elwood in the movie. “It was $28 million it cost, it did go over, we were shooting nights, we couldn’t go back to SNL, we had to keep on the movie,” Aykroyd revealed. “And yes, there was a budget for cocaine built-in there. We were working at night, coffee won’t do it.”