Marvel Reportedly Getting The Rights To Daredevil Back In 2020, Want Kingpin In The ‘Spider-Man’ Movies 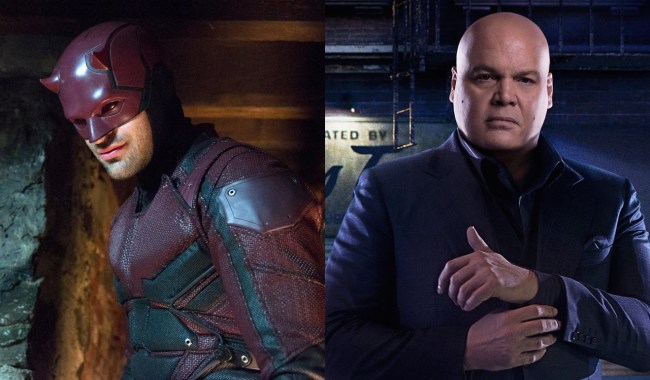 In fact, not only is Marvel Studios utilizing Disney+, but they’re really leaning into it, as exactly half of their Phase 4 content — five out of ten projects — will be airing on the service. As they say, the future is streaming.

However, while the Mouse House has seemed to settle on sharing the MCU between television and film, it’s important to remember that regardless of where a character is based (such as Scarlet Witch in WandaVision) they are liable to pop up in any of the properties.

And according to recent rumors, one Marvel Studios gets the rights back to their former Netflix Defenders, Daredevil and Kingpin are among the characters who will be making the jump to the MCU.

Sources close to WGTC  — the same ones that told us Black Adam will appear in Shazam! 3 after his solo movie, Daniel Radcliffe is being eyed for Moon Knight and that a Scream reboot is in development, all of which have since been confirmed — have informed us that Marvel are getting the rights to the Defenders back in early 2020, and will look to reboot the characters and move them into the MCU as soon as possible following that. In fact, there are already plans underway, with WGTC recently telling you about a potential guest spot for Jessica in Captain Marvel 2.

Of course, Jon Bernthal’s Punisher will also come as part of the deal, with Marvel said to be reviving Frank Castle’s show for a third season, so look for Daredevil, Jessica Jones, Iron Fist and Luke Cage (and the aforementioned Castle) to be rolled out onto both the big and small screen over the next couple of years. [via We Got This Covered]

Additionally, should Marvel retain the rights to these Netflix characters, they reportedly want to use Vincent D’Onofrio’s Kingpin in the Tom Holland-starring Spider-Man franchise.

Sources close to WGTC — the same ones that tipped us off about Viola Davis’ return in The Suicide Squad and the development of a Ms. Marvel TV show, both of which have since been confirmed — have told us that the studio are looking to bring back Vincent D’Onofrio’s Kingpin and have him star in Tom Holland’s Spider-Man franchise.

Marvel are apparently keen to have him play a role in the MCU. It makes sense, too, as the character was arguably the best part of the entire Netflix/Marvel experiment and the actor has been vocal in the past about his desire to keep portraying Wilson Fisk. [via We Got This Covered]

Given that Charlie Cox’s Daredevil and D’Onofrio’s Kingpin were two of the best aspects of Marvel’s Netflix experiment, it makes sense that the studio would want to keep the characters consistent when they