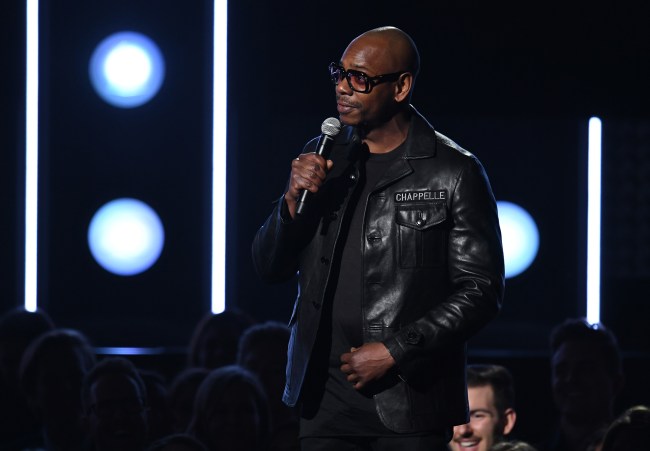 In the aftermath of the brutal murder of George Floyd, the conversation in the country has turned to how humans – especially white people – can do better moving forward.

Comedian Kenny DeForest shared an amazing story on Twitter about Dave Chappelle dropping by a show to do stand-up back in 2015 that feels like a good place to start.

“I’ve been sitting on this story since January 19, 2015,” explains the comedian. “I wanted to respect his process and not burn any material for him. But, since he’s released HOURS of material since then I think it’s safe to say he won’t be using any of this bc he’s a genius who can just come up with more.”

Chappelle dropped by after being asked to perform while in town to support fellow comic Kevin Hart. Hart was hosting SNL for the first time.

All of Chappelle’s material was off the cuff that night, and the conversation turned to police brutality after the comedian asked the crowd for topics.

Chappelle talked about the recent killing of Eric Garner. During his monologue, a white woman shouted out “Life’s hard, sorry ‘bout it!”

“It takes the air completely out of the room,” recalls DeForest. “A collective gasp. Chappelle zeros in on her. ‘What did you say?’ She repeats it. Chappelle starts going in.”

What happened next involved a history lesson on being black in the world, being black in America, white privilege, and the only real way to stop racism and police brutality.

My coolest night of comedy was when Chappelle dropped by @ComedyAtTheKnit when @MrWillMiles @theeclarkjones & I were still hosting. We were in the back room & he was in town supporting Kevin Hart hosting SNL. I texted @joyellenicole like “any chance Dave wants to go up?” THREAD

The full Twitter thread can be viewed here but here’s a transcript of the evening.

“My coolest night of comedy was when Chappelle dropped by @ComedyAtTheKnit when @MrWillMiles @theeclarkjones & I were still hosting. We were in the back room & he was in town supporting Kevin Hart hosting SNL. I texted @joyellenicole like “any chance Dave wants to go up?” THREAD

We start the show thinking he MIGHT come. A couple comics in, he sneaks in like a boxer with his hood up. We’re in the green room smoking, drinking & joking. The dude is a machine. Every topic that came up, he had something profound for. We bring him up last, the crowd LOSES IT

He was asking the crowd for headlines to riff on. They toss one out, he riffs a joke. Every topic, he immediately had a perfect joke for. Now, this was days after the cop that choked Eric Garner to death in Staten Island (you know, murder) was not indicted by a grand jury.

Protests etc were all over the city. Tensions were high. About 15-20 min into his set he asks for another topic & someone shouts “police brutality!” He pauses then says “you really wanna do this? Ok.” He chugs his Tecate and sets it down. Our crowd was always beautifully mixed.

The show was started by @hannibalburess, so it’s always had a black base, but it’s in Williamsburg so there were always hipsters of all persuasions and, amazingly, people from all over the world. We always had global tourists which I thought was incredible for a free bar show

So Chappelle starts talking about Eric Garner and watching him get murdered in cold blood on camera and how it makes him scared for his children. I remember he said “I thought body cams would help, but what good is video evidence if y’all don’t care?”

A clearly privileged white girl (she had a wide brimmed felt hat for chrissakes) shouts “Life’s hard, sorry ‘bout it!” and it takes the air completely out of the room. A collective gasp. Chappelle zeros in on her. “What did you say?” She repeats it. Chappelle starts going in.

He starts educating the crowd on the history of black people and the police. He talked about slave patrols and Rodney King and Watts and Emmett Till and Black Wall Street. He talked about Trayvon Martin, Michael Brown, and he talked about John Crawford III

If you don’t remember John Crawford III, google it. It happened right around the time of some higher profile killings, but it’s as awful as anything you’ll see. He was on the phone in Walmart and picked up a BB gun (that was for sale in said Walmart) and was just looking at it

Some scared cracker-ass called the cops, and this officer comes in, doesn’t even bother saying “drop the weapon” or “hands up” and just guns him down. The security footage makes it plain as day. The footage will make you sick. Disgusting and outrageous in every conceivable way.

Chappelle then tells a story about getting pulled over in rural Ohio where he lives. This is before the Crawford shooting but after Ferguson so racial tension is bubbling. He said “I may be white on paper, but I’m still black. So I’m nervous”

He says “the cop approaches and he can tell I’m nervous. I have both my hands on the wheel and I say ‘officer my license and registration is in the glove box. I’m going to reach for them now. I’m promise not armed’ I could tell the officer was offended that I was nervous. He said

‘I know who you are Dave Chappelle’ & I said ‘so why do you need my license and registration?’” He gets off w/ a warning. The twist? The same cop would go on to murder John Crawford III. His take away: “I shouldn’t have to be Dave Chappelle to survive police encounters”

He goes on to explain that one of his best friends is South African. He said “I asked him what it was like in South Africa right before apartheid ended and he said it was chaos in the streets. There were riots & car bombs etc, but the amount of people caring hit critical mass…

…and there was nothing they could do to stop it. The people had momentum and apartheid ended. Critical mass. That’s what we have to hit. Once enough of you care, there will be nothing they can do to stop the change”

It was incredibly powerful. The crowd was somber and silent

After the show, we’re in the green room. @joyellenicole comes back and says “that dumbass white girl wanted to talk to you, but I told her you were busy” and he goes “no, bring her back” so Joyelle leaves and comes back with wide-brim hat girl and her friend.

Hat girl is humiliated and her friend even more so. Hat girl speaks first:
“I just wanted to say I’m sorry for what I said and thank you for educating me. I was ignorant before, but I want you to know I learned from you tonight and I won’t say things like that anymore”

Chappelle responds “you’re ok. That’s all we can ask. Know better, do better. I want to thank YOU for hearing me and listening. That’s your role. And now you know. Now you’re part of that critical mass we talked about and next time you hear a friend say some ignorant shit like…

She says “really?” And he says “of course! Friend get over here for a picture” the friend approaches, they take photos, he hugs them both and reiterates that it’s ok and just to be part of the solution and sends them on their way. CLASS. I couldn’t believe what I witnessed

He changed everyone in that room that night. 200+ people became part of the solution if they weren’t already. Even a privileged girl in a privileged hat with a privileged mindset. Point is, it doesn’t matter what you thought before. You can always change.”

DeForest concluded the thread by stating, “And you can always become a part of the critical mass trying to push this shit forward. All you have to do is care and allow that care to become education and action.”