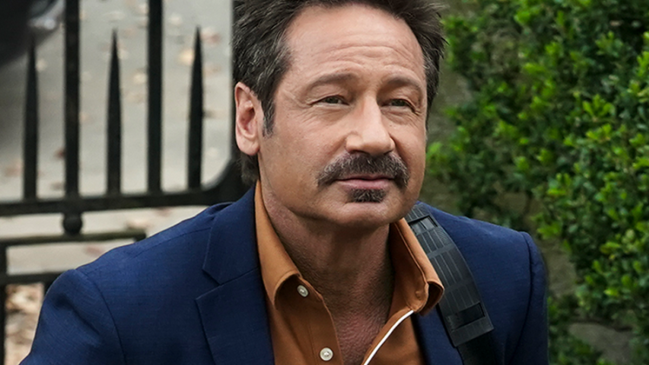 You can tell a fair amount about someone based on the first project that comes to mind when they hear the words “David Duchovny”: there are the OGs who wouldn’t need more than a second to say The X-Files, comedy fans who might cite his scene-stealing cameo in Zoolander or his role in Evolution, and others who know him best for playing the Charles Bukowski-inspired writer Hank Moody on Californication.

Fans of that last role will likely have the easiest time adjusting to the actor’s newest one in The Estate, a movie where he stars alongside Toni Collette and Amanda Farris as Richard, a mustachioed rich halfwit who exudes some incredible Sleazeball Energy while lobbying with his relatives for the inheritance of their terminally-ill aunt.

Duchovny took a break from acting in 2017 to pursue his writing and music endeavors, but his performance in The Estate—which marks his third project since returning to the industry where he’s made the biggest name for himself—proves he hasn’t lost his touch (or the trademark monotone voice that drives his deadpan delivery home).

I got the chance to chat with Duchovny ahead of Friday’s release of The Estate, and he discussed the impressive facial hair he sports in the film, how a “million-dollar idea” he had for an app that he eventually realized was one of the most basic functions of every modern phone inspired one of the movie’s best jokes, and discussed how he started honing his comedic chops on The X-Files (as well as why it took a while for creator Chris Carter to warm up to the idea of embracing the humor at the core of some of the show’s best episodes).

Our interview with David Duchovny

BroBible: Thanks for taking the time to chat today. I used to sneak episodes of The X-Files on Sunday nights when I was a kid because my parents wouldn’t let me watch it and the show holds a very special place in my heart.

So, I got the chance to watch The Estate and have one very pressing question: was that your actual facial hair?

*Laughs* Yeah. Why? Is that so hard to believe?

Oh, I didn’t doubt you could do it on your own. I just know that makeup artists can be very particular about that and the issues you can run into when it comes to continuity.

I’m pretty proud of it. It’s not Tom Selleck, because you can’t go against the big boys right away, but I think it’s a solid entry for a mustache.

Can I ask how long that took?

The mustache helped establish Richard’s aesthetic, but the flashy and somewhat gaudy outfits that you wore really help flesh out the character. I’m curious if you have any input on that front or if there’s any crossover with your actual wardrobe.

Well, now there is because I took it all home. But no.

Those are both interesting questions because they both have similar answers. When I showed up to do this job, I showed up the day before I was going to be working, so I hadn’t defined my wardrobe look or my facial hair.

I went to wardrobe and I told Dana Embree—who was the wardrobe supervisor, who was terrific—that I envisioned this guy in $3,000 tracksuits. She was like, “We can’t afford $3,000. tracksuits,” but she could get me things that tried to be in that vein.

She found stuff that I just looked at and knew was perfect for a guy like Richard. I’ve seen how everybody wears really tight pants with no socks—highwaters like all these athletes do it—and I was like, “This guy is like that.” He wears pants that are too tight and highwaters with loafers and no socks.

As soon as I started to put on these clothes that she had pulled for me, I really started to see the guy. That was super helpful.

Then, I went to set to see Dean Craig, the director, and said, “We gotta decide on what to do with this beard” because I’d just grown it out for two months. I said, “I don’t want it just to be a beard. It’s gotta be something else, I don’t know if it’s just a mustache or if it’s a goatee or Fu Manchu.”

We had a serious discussion in the makeup trailer about what would be the funniest facial hair. We both knew that we couldn’t go back once we saw what I have in the movie.

You really tied it all together with the soul patch.

My other big takeaway was that there are some spiritual similarities between Richard and Hank Moody—they both even drive a Porsche. Was that something that cross your mind at all? Is there anything that draws you characters that you could impolitely describe as “jackasses?”

Whenever you get to play a character who just breaks barriers and who just says what they think, it’s a superpower. We don’t get to do that in life, but a character like that can be great fun to play because they really know where they’re coming from. They’ve got a really serious point of view because they’re just saying everything all the time.

It didn’t even click with me that I was driving a Porsche. I do recognize that people associate the Porsche with Hank Moody, but I don’t. It’s like when people ask me questions about aliens, it always seems weird to me, but I know where it’s coming from.

Definitely. I sort of just had an “Aha!” moment toward the end when Richard explicitly mentions the car he’s driving.

I had nothing to do with that. They gave me the car to drive up in and I honestly didn’t even think, “Oh. Hank Moody.”

Was there any improv on set or did you mostly stick to the script?

There was improv, but not a hell of a lot.

Dean’s a good joke writer and he wrote funny scenes. If you improv too much in that area, you can ruin the timing of the scene. But there were the “Call me ‘Dick’ instead of Richard” and “I like Dick now” jokes. That was all stuff that I had brought to it.

There was also the Mirror app thing [Richard’s character has an idea for an app that allows you to use your phone as a mirror before being informed you can simply use the front-facing camera on every smartphone].

I think my favorite joke in the movie was when you called someone after discovering you’d been beaten to the punch. The delivery was incredible.

That actually happened to me in real life.

I was walking in a snowstorm in New York and I was like, “Oh my God. I’ve just had my million-dollar idea.” It’s a Mirror app. And then I realized—with the help of other people—that you could do that with your camera.

I’d also love to ask about what draws you to comedy in general. I don’t know if this was a conscious reinvention after The X-Files, but you kicked off the new millennium with Evolution and Zoolander. I know you also worked with David Lynch on Twin Peaks, which is funny in its own unique way thanks to its sheer absurdity, but I’m interested to know what brought you to the genre and why you keep coming back.

I think it was a conscious decision at that point coming off of The X Files, where I was always trying to smuggle some funny into whenever I could. I was just looking for the kind of vein of comedy that I thought I could do well in.

At that point, it was you know, Jim Carrey and Ben Stiller. I love them. Obviously, they’re hugely funny, but they were funny funny. I was looking for my own thing. I wasn’t even sure what my thing was yet, because I hadn’t really done it.

When I got Californication, I was like, “Oh. Okay.” It felt more like ’70s movies. Like, “Okay. This could be more my thing. But Zoolander was absurd, and I thought, “Oh, I can exist in kind of an absurd way too.” I think The Estate is more the brother of a movie like Zoolander to me than anything I’ve done recently.

Again, it’s the sincerity of a character like Richard that’s funny; the fact that they don’t see how ridiculous they are.

I promise I will only ask you one question about The X-Files, which is coincidentally about the comedic elements of the show.

I think part of what makes it so great is that it never took itself too seriously. You have overtly funny episodes like “Jose Chung’s From Outer Space” and “Clyde Bruckman’s Final Repose,” but as you said before, it seemed like you were always trying to squeeze in a wink and a nod while playing Fox Mulder.

Was that something you did on your own or were there discussions with Chris and the writing staff? Did you eventually get a feel for the right tone to strike for each episode?

It was quite a gift to be able to flow through those different fields, and as an actor, it was also challenging to gauge the script and how much funny there could be.

So Chris was smart and generous enough to open it up and to allow me to open up a little into it as well. He even embraced it eventually—like with “Post-Modern Prometheus,” the black-and-white episode.

Oh man, the closing scene with the Cher song. I laughed out loud the first time I watched it.

Yeah. He really grew in response to the talented people that he hired and that allowed his show to expand.

I assume we can both agree people know you best for your acting, but you are a man of many talents. I know you took a few years away from the camera to focus on writing and music, so I’m curious if there was any catalyst that brought you back and if there were any issues transitioning to being back in front of the camera.

Part of the absence was the pandemic, but I also wasn’t seeing opportunities to do what I wanted to do. I didn’t have to work, so I didn’t.

Whenever you step away for any moment, you always think that all the opportunities that are there in front of you right now will be there when you come back. Everybody learns the lesson that the world moves on and that you gotta reestablish yourself again.

As much as I didn’t like that, I don’t mind it. I like the challenge a little bit. And it also allows you to redefine yourself. Which is exciting if you can—and if you have the energy for it.

Do you have any major redefinition plan or are you just going to see what happens?

I don’t know. I just finished directing and acting in Bucky F*cking Dent which is an adaptation of my novel. I’d like to do more of that where I’m acting and directing. It was hellish physically for me, but it was very fulfilling creatively.

So, I don’t know. I never know until it hits me in the face, unfortunately.

Such is life. Thanks for your time David, I appreciate it.

Thanks, I appreciate it too.

Portions of this interview were edited for clarity. The Estate hits theaters on Friday, November 4th.