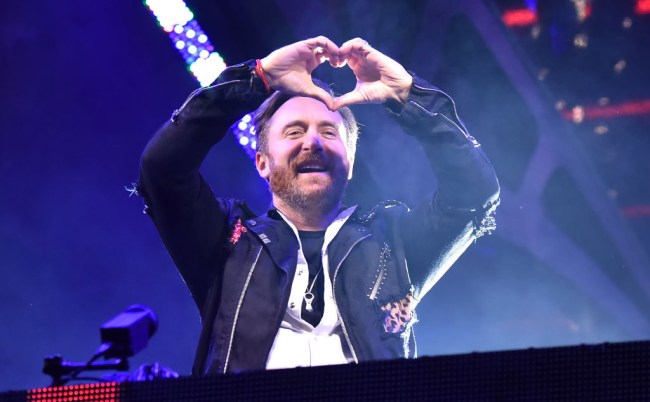 This has to be something from a secret new season of Curb Your Enthusiasm, right? I mean, there’s just no way a sentient human being can be that unable to gauge the current societal climate, right? There’s simply no way that a French DJ would stand atop a Manhattan skyscraper as he fires up his “I Have A Dream” remix while “shouting out” George Floyd’s family, right?

WRONG! WRONG! As it turns out, David Guetta stunningly did attempt to remix MLK’s legendary “I Have A Dream” in honor of the late George Floyd during a live concert over the weekend, and needless to say, the internet was not pleased.

it's lazy and easy to joke that something feels like it was scripted by Sacha Baron Cohen but also pic.twitter.com/7hFkUbNIsn

there’ve been a lot of crimes committed against my ppl this weekend, but david guetta putting a drop behind MLK’s “i have a dream” speech is up there pic.twitter.com/4iskArPcVy

We’ve found it. The whitest way to react to racism. pic.twitter.com/aOE3PYESt7

What the hell did I just watch? In what way was this a good idea? Who asked David Guetta to remix MLK on a house track and dedicate it to George Floyd? Who?pic.twitter.com/gZY4Y6QqNj

Here’s an attempt at explaining what exactly this event was supposed to be, via MLS:

After previously teaming up with Inter Miami for his inaugural “United At Home” event last month in Miami, internationally-renowned DJ David Guetta partnered with MLS and Heineken to hold a second concert on Saturday, May 30 in New York City.

The show which was hosted from a Manhattan rooftop, is the latest MLS Unites initiative to raise money to help those in need during the COVID-19 pandemic. The Miami event raised more than $800,000. [via MLS]

Major yikes. To be fair to Major League Soccer, though, there’s no guarantee that Guetta warned them about the MLK-remix. Still, maybe it got lost in translation, who knows — the fact that Guetta himself though that this was the move just goes to show how clueless some of us really are.