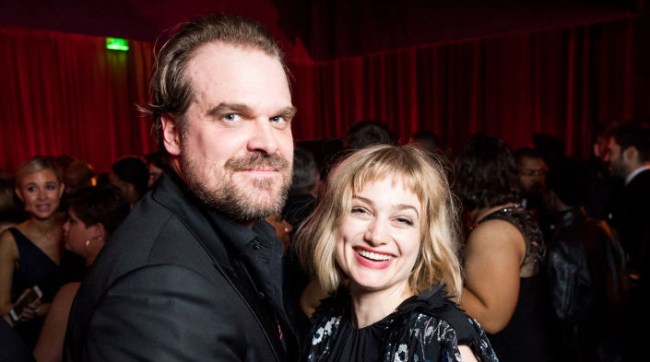 Thanks to the internet, Stranger Things actor and social media superstar, David Harbour actually made it down to Antarctica (with Alison Sudol, more on that in a moment) and got to dance with penguins. Naturally, he took a whole bunch of pictures and videos.

In case you missed it, back in January Harbour, who has lost bets on Twitter which have seen him join a girl in her high school senior photos and agree to officiate a woman’s wedding, asked the Internet to help him get to Antarctica with Greenpeace so he could do the Chief Hopper dance with some emperor penguins. After asking Greenpeace how many RT’s he would need, they responded he would have to get 200,000. He got almost 400,000.

Hey @Greenpeace , how many retweets to send me someplace to tell emperor penguin couples I think they have terrific parenting ideologies? Perhaps hone the Hopper dance with the males…

Hmm, if you get over 200k we’ll ask the Captain if you can join our expedition to the Antarctic and dance with the penguins. #StrangerThings have happened https://t.co/qT78aIcKOw pic.twitter.com/LmmLceE17J

So, over the weekend, Harbour finally made it to Antarctica with Greenpeace, documenting the whole thing on social media, and even brought along Fantastic Beasts and Where to Find Them actress Alison Sudol, who also shared a bunch of pics and videos, for good measure. (Are they dating? They were at some awards shows earlier this year together too. Was anyone else aware of this?)

Of course, because he’s Chief Hopper, the pics, videos, and mostly the captions, were great.

Penguins got nothin on this. Warn them that I’ve got my snow pants, @greenpeace and I’m coming early feb.

Hey Internet. It’s started. Remember that your retweets are responsible for this madness. Man, I hope it isn’t cold…

If my toupee blows off I’m gonna be super pissed. #CantFindTheBoat #PenguinDanceDelay

When your fellow diplomat thinks her chin is oversized in automobile selfie, you frame to defeat said trifling opinion by showing her the power and glory of a truly large and stubbly mandible. #CarsToAntartica #NoClue #TaxiDriverCertainty #LargestContinent #HowCouldWeMissIt #SirFrancisDrake

I found the ship. Right where @greenpeace left it. Huzzah. The white stuff does not appear to be cotton candy. Im positive I’ll be over-posting the crap outta this trip. Feel free to unfollow me at your leisure. #Magnets #isuckatgeography #CarnivalTreats #sirfrancisdrakewasajerk

Who are the mystery people above my shadow and to the right of my selfie hand reflected in my glasses? And why are they forcing me to selfie with this stunning backdrop?? Why won’t they photograph me?? Have I already been asked and declined because only I can take good, non-double-chin photos and won’t trust anyone else with the camera?? Will I ever stop asking Internet folk I’ve never met these very specifically unknowable questions of them?? #SetSailAlready #SeaLegsLandBrain #mirroredaviators #EvenACopOnVacation

Playing hard to get…I may have to spring for dinner and a movie to get my groove on with these ‘guins. #onaboat #protectantartic #sodamncold #sodamnstill #somuchwildlife

Just a few snaps from the phone of the majesty I see daily. The last being an animal rarely seen in Antarctic waters. Comes here once in its life to feed mainly on the rich ecosystem’s plethora of golden round ritz crackers.

If you decide to come to the Antarctic for the Internet service, you’re going to be disappointed 😔

https://t.co/29mTHvLYOA
here's a petition to create the largest protected area in the world.@Greenpeace has 1M sigs.
let's give them 1.8.
1.8 million.
1 for every proposed square km
for the 'guins.
here's me dancing with them,
as promised.
they don't have netflix.@Greenpeace ? pic.twitter.com/jjLBk2XOIr