A Day In The Life Of A New York City Finance Dudebro, By Instagram’s Midtown Uniform 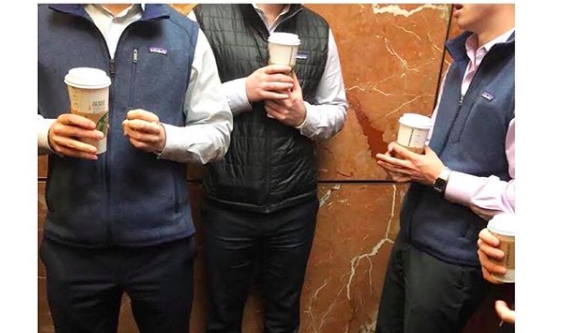 For several months we at Midtown Uniform have studied the typical finance fuckboy in his natural habitat of Midtown Manhattan. Our research has inspired a community of cultural observers to bring to our attention brochachos living in other parts of our great land as well as around the globe. Studies overtime reveal similar patterns in the way these brobots dress, what they eat, what they drink, where they work, and much more. We are now using cutting edge technology to connect millions of data points to develop the most elaborate set of fictitious personas the world has ever seen.

Without further ado, here is a day in the life of the finance dudebro…

7:45 am – Wakes up to his phone alarm playing the latest Imagine Dragons track.

8:03 am – After a shower throws on his heather grey Patagonia vest, blue gingham oxford shirt, pleated dark blue slacks, offensively bright and colorful socks, and faux Gucci (deal) sleds which he claims to be real. Lastly, he throws his fresh-out-of-the-box Juul piece in the back pocket for good measure.

8:17 am – Leaves his apartment in Murray Hill to head over to the local barista. He orders his usual espresso shot and vanilla latte, which he refers to as a shot and a beer. When asked for his name for the order he utters, “Just put Cole-train.”

9:06 am – Arrives at the office to be greeted by his fellow finance bretheren who immediately
begin to discuss the obese nature of the bonuses they ‘bout to git in January.

12:14 pm – Lunch plus Juul break. Might sneak in a real heater depending on the level of stress in the office.

3:39 pm – Spends an hour scanning BroBible to make sure they aren’t talking about him again.

7:48 pm – He and some work homies leave the office with a full head of steam en route to one of Midtown’s finest watering holes for some aggressive happy hour.

12:09 am – After two dirty martinis and seven Titos-sodas sends a wildly ambitious “u up?” text to one of his female coworkers. She curves him so he ends up falling asleep in the middle of a heated battle royale near Lucky Landing (…think we nailed that Fortnite reference).