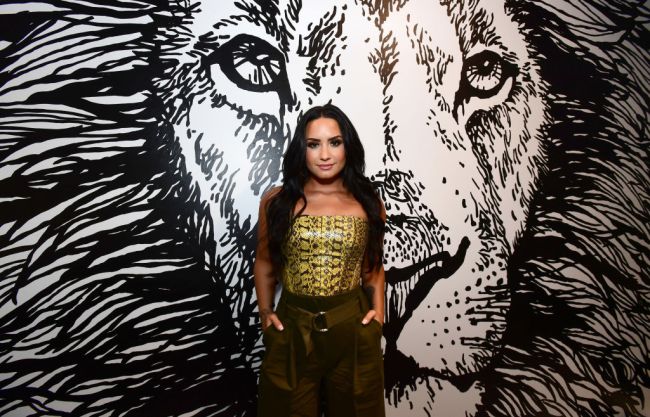 Many online critics are blasting Demi Lovato for what some say is “hypocritical” behavior, and it all revolves around a turkey named “Sandy.”

The 28-year-old singer promoted the Farm Sanctuary on her Instagram, and is seen “cuddling with a rescued turkey named Sandy.”

“I recently visited @farmsanctuary, which is the first animal rescue specifically for farm animals in the U.S. I spent the day with cows, goats, sheep, pigs, donkeys, and turkeys, who were all rescued from cruelty,” Lovato wrote. “The highlight of my tour was cuddling with a rescued turkey named Sandy. Not only are these animals cute, but they are forgiving. The animals at @farmsanctuary had to learn to trust humans after what they’d been through, and their strength and resilience is amazing! Check out adoptaturkey.org or @farmsanctuary’s page for more information! #AdoptATurkey.”

“The turkeys were so excited to meet Demi Lovato at our California Sanctuary,” the Farm Sanctuary wrote on November 8. The turkeys should think twice about being excited to see Demi Lovato, it might be the last person they ever see.

Everything was fine and dandy until Thanksgiving, when Lovato added a photo to her Instagram Story of a…roasted turkey.

One tweet showing Demi’s sudden change of heart about turkeys went viral, racking up more than 370,000 Likes on Twitter. Another tweet posted a “how it started vs. how it’s going” meme with Demi and the tale of two turkeys.

how it started: how its going: pic.twitter.com/aL8t3hh1fu

Only weeks after calling for people to adopt turkeys, Lovato cooked a turkey, a move that many saw as hypocritical.

People are concerned about the welfare of Sandy, more specifically, did Demi eat Sandy on Thanksgiving?

If you're asking if I've been saving these photos of Demi holding a turkey for weeks specifically to post today then the answer is yes.

Thoughts and prayers to Sandy the turkey.

demi lovato after taking that photo with a turkey : pic.twitter.com/Sx9stbVUsR