Denzel Washington Breaks Down While Remembering His Late Mother: ‘I Didn’t Cry At Her Funeral’ 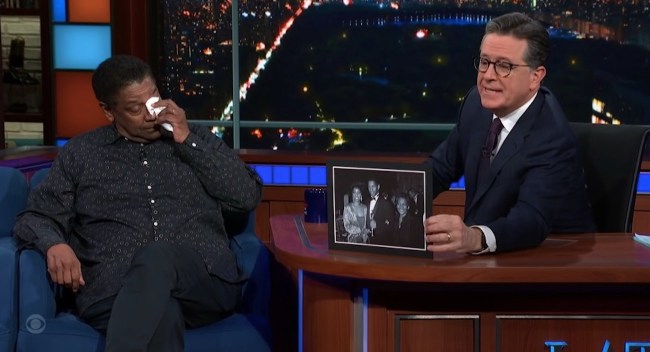 For my money, Denzel Washington is the best actor of my lifetime. Yes, Leonardo DiCaprio and Daniel Day-Lewis included. No disrespect to those two legendary performers, of course, it’s just that Denzel — whether he’s playing a hero or a villain — brings a sense of charm and charisma that I find to be unmatched. I actually just rewatched American Gangster a couple of days ago (which is on Netflix until December 31, so make sure to get in a watch before it departs) and the way in which he makes what should be a repulsive figure totally endearing is genuinely mindblowing, to such an extent that at no point are you rooting for Russell Crowe’s character Richie Roberts (who’s also a two-time Academy Award winner, by the way). You’re all-in on Frank Lucas coming out on top and that’s due to Washington’s undying force of personality.

It should come as no surprise, then, that even when he breaks down into tears over the death of his late mother on national television — who passed away in June at the age of 97-years-old — he does so with unbelievable and endearing grace.

Colbert brought up a quote Washington said about a mother being a boy’s first true love, and the host asked the actor how he is honoring that love with his work. That’s when the Oscar winner was hit with some unexpected emotions.

“A mother is a son’s first true love. A son, especially that first son, is a mother’s last true love,” Washington began. “That’s… I’m getting choked up. Sorry.”

Washington, who stars in the new Joel Coen film The Tragedy of Macbeth, went on to say that his mother was there for everything throughout his life and career, but “she went home,” before asking Colbert for a tissue. [Yahoo, via The Late Show with Stephen Colbert]

After revealing that he didn’t even cry at her funeral, Colbert asked why he thinks that is. Washington, the endlessly charming great that he is, predictably had the perfect response:

“This is terrible. [I] didn’t cry at her funeral. I don’t know. I guess I saved it up for you,” Washington said, laughing. “For crying out loud!”

Washington will next be seen in Joel Cohen’s The Tragedy of Macbeth alongside Frances McDormand, Brendan Gleeson, Bertie Carvel, Alex Hassell, Corey Hawkins, and Harry Melling, which will hit theaters in the United States on Christmas Day before hitting Apple TV+ on January 14, 2022. The film — Joel Coen’s first directorial effort without his brother and longtime collaborator Ethan — currently has a 98% critics score on Rotten Tomatoes. Given the talent involved and the prestige of the story, Academy Award nominations for Best Picture, Best Director, Best Actor for Washington, and Best Actress for McDormand feel like a shoo-in at this point.