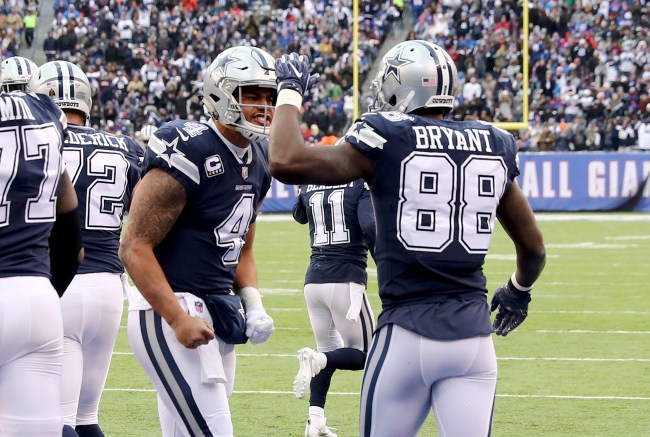 Dez Bryant has some thoughts about the team signing another QB while in contract negotiations with Dak Prescott.

Former Bengals’ QB Andy Dalton is signing a one-year deal worth up to $7 million that includes $3 million guaranteed with the Dallas Cowboys, source tells ESPN.

Dalton is returning to Texas.

New Cowboys’ QB Andy Dalton already owns a home in Dallas and now doesn’t even need to move. His home address won’t change, but his work address now will. To the Star in Frisco.

The Cowboys insist that signing Dalton doesn’t mean that they’re not interested in signing Prescott for the longterm.

Interesting signing to secure a top backup. But… before anyone asks, #Cowboys source says this has nothing to do with Dak Prescott. This is just about Dalton wanting to be back in Dallas and the #Cowboys wanting a strong option in case of injury. Simple. https://t.co/WrXSLdIqZL

Prescott’s former teammate Dez Bryant thinks the Cowboys were out of bounds for signing Dalton during Dak’s contract negotiations and let them know about it on Twitter.

Nothing against Andy dalton because I think he’s a great player..but the cowboys are extremely out of line… Pay Dak… I watched the cowboys pay Tony Twice once without a winning rec… I guess the cowboys viewing the QB position a plug in piece because of the dominant offense

The cowboys offense can be special… you can place anybody in that offense if they screw up with that much talent on the field they don’t deserve to play QB.. But Dak is the guy for the position… he earned that https://t.co/1zjAJIRwXr

I was told a lot of things before and things ended up False… Dalton has been a starter damn near his whole career..: https://t.co/Y4fra61xFx

I really never seen a QB have to hold out for what is rightfully owed to him….you don’t make your leader and the face of the franchise feel some type of way https://t.co/sDIhARG1oB

Dak should have got paid soon as the season was over https://t.co/SdcZYyJoNu