Do Checks Expire? Here’s Everything You Need To Know About How Long You Have To Cash In 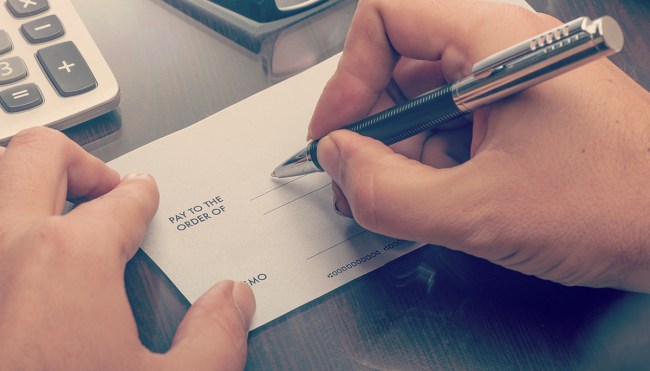 We may live in an increasingly digital world, but society has yet to reach a point where the days where you have to keep some real, actual, physical checks on hand to pay for certain things are behind us.

For the most part, those situations routinely arise at the same time each month, and despite my wishes, checks and I have remained close over the years. The steady relationship I used to have with cash has slowly become a fleeting memory and the only time coins and I really get in touch is when I can’t find a flathead screwdriver, but checks remain a steadfast part of most of our lives—whether we like it or not.

We write checks for rent and to pay for our kid’s daycare. We receive checks from our aunt on our birthday. We write a check for someone when they get married, and we (fingers crossed) receive a bunch of checks when we tie the knot.

Most of us might not receive physical paychecks anymore at a time when money just magically appears in our bank account, but every once in a while, we’ll have to track down a copy to prove that we are, in fact, gainfully employed. Pens may no longer be the necessity they once were, but as long as checks are still around, they’ll always have a place in this world.

Here’s a fun little game: try to remember where your checkbook is at this exact moment. I’d wager around 40% of the people reading this don’t have a clue, and even though the other 60% might think they do, I bet 50% of them aren’t actually sure and will find themselves tearing through drawers and sifting through piles of forgotten envelopes and papers scattered around their homes the next time they need to write one.

Good luck finding that box of extra checks, though. If you don’t know where it is off the top of your head, you might as well just order new ones right now—maybe ones with your favorite team’s logo on them because hey, why not?

The primary reason checks have managed to hang in there like a kitten on a motivational poster is because they adhere to an established set of rules; ones we’ve collectively agreed to abide by, because if you don’t, you’re essentially just left with a worthless bookmark of regrets.

Given the increasingly antiquated nature of checks, you might not be intimately familiar with these regulations, but given the potential consequences, you owe it to yourself to study up and ensure you don’t fall victim to the pitfalls that come with living in blissful financial ignorance.

What’s The Difference Between Various Types Of Checks? 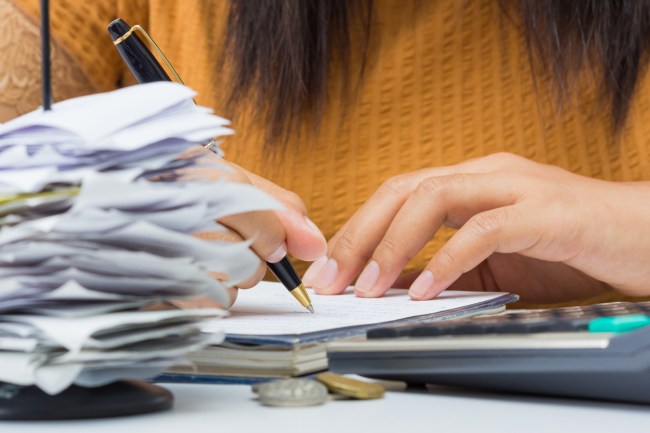 We’re going to jump right into the deep-end here, because before you can talk about the ins and outs of using checks, you need to break down the differences between the various types.

This can be a bit overwhelming, as checks can fall into one of 14 defined categories (which, if you’re wondering, is two more than the number of older brothers the eponymous character in Good Will Hunting claimed to have). They are *takes a deep breath* bank checks, personal checks, business checks, commercial checks, government checks, electronic checks, payroll checks, traveler’s checks, money orders, certified checks, cashier’s checks, tax refund checks, insurance checks, and *one last inhale* out-of-state checks.

I’ve heard of Chex Mix, but that’s something else!

To review: that’s fourteen different types of checks, each of which are governed by their own list of rules. Thankfully, navigating the intricacies isn’t as tough as you’d think.

This one’s easy, as it’s what most people would refer to as a “regular” check. They’re essentially synonymous with “personal checks” that are associated with a certain account (business, commercial, and government checks fall in the same category, as they simply represent a larger entity).

As you can likely surmise, electronic checks (or e-checks) are just digital versions that allow you to pay your heating bill without having to worry about getting ink on your hands.

Again, this one is pretty self-explanatory: payroll checks are how most of us get paid (whether physically or via direct deposit) and what the IRS uses to make sure Uncle Sam gets his cut.

Traveler’s checks are most commonly used by visitors to a foreign country in place of local currency, but they’re also a big favorite of dads who are still stuck in the 1980s—you know, the ones who ask the waiter if the restaurant takes Discover.

If you’ve ever wired someone money at Western Union or purchased something you saw in an infomercial in 1997, you may have used a money order. It’s a way for the recipient to confirm the sender has the required funds for the goods or services being paid for, and a third party usually gets a nice little fee for helping to mediate things.

Certified checks are essentially a more secure type of money order and are backed by a financial institution to give the person on the receiving end of the funds a bit more peace of mind (think of the former as a straight-to-video movie starring Nicolas Cage and the latter as one with enough support behind it to get a theatrical release).

When you secure a certified check, your bank or credit union will make a note in your account to ensure the amount is available when it’s cashed. It’s basically the same thing as a cashier’s check, which is often preferred because the issuing bank supplies its own money to complete the transaction before recouping it from the account holder.

Other Types Of Checks

Let’s close this out with a lightning round!

Tax checks are the ones that usually (and hopefully) come your way in the spring if you find out Uncle Sam got a bit too greedy over the course of the previous fiscal year when you file your federal tax refund.

Insurance checks are what you (again, hopefully) get as compensation for a moment in life that caused you more pain and misery than you’d prefer, and out-of-state checks are basically a relic of a bygone era that requires you to endure a long wait before they finally clear.

How Long Do You Have To Cash A Check? 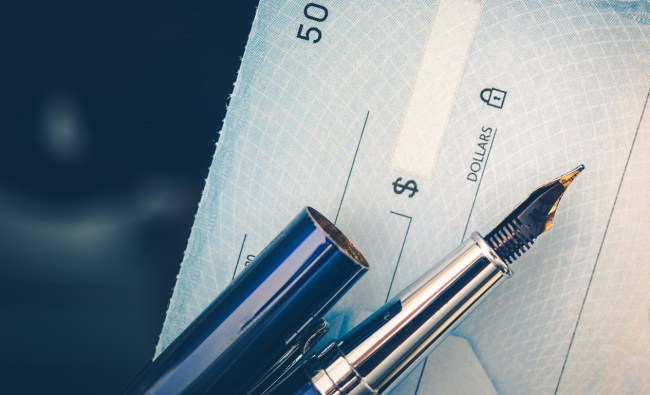 Ummm, what are you waiting for? Just open up your bank’s app, buddy. You can cash a check as soon as you get it by snapping a couple of pictures. You don’t even have to leave your house. It’s pretty sweet.

However, if you don’t want to do that, you have to remember that (again) checks have rules. One of those rules is that checks can essentially expire; sure, they might not self-destruct after a certain amount of time, but the clock starts ticking on the issue date.

According to the Uniform Commercial Code (a set of laws that keeps tabs on checks and other financial exchanges), banks are well within their right to pass on cashing a check if it’s more than six months old (a.k.a. a “stale check”). This isn’t a hard and fast UCC rule, as it’s ultimately to the bank’s discretion; financial institutions are permitted to accept stale-dated checks past the six-month mark, but they tend to be a little wary of doing so because the money in the issuer’s account might contain insufficient funds.

This actually served as the basis for an episode of Seinfeld where Kramer discovers a pile of uncashed checks Jerry received from his Nana every year for his birthday. After Kramer gives him a hard time, Jerry cashes all of them at once. This results in his poor Nana getting a call from the bank over the bounced check deluge (and the overdraft fees she was presumably hit with) before setting out to settle things and ultimately getting lost in New York.

So, you can either cash a check right away or potentially run the risk of causing an old woman to get lost in New York City. The choice is yours. 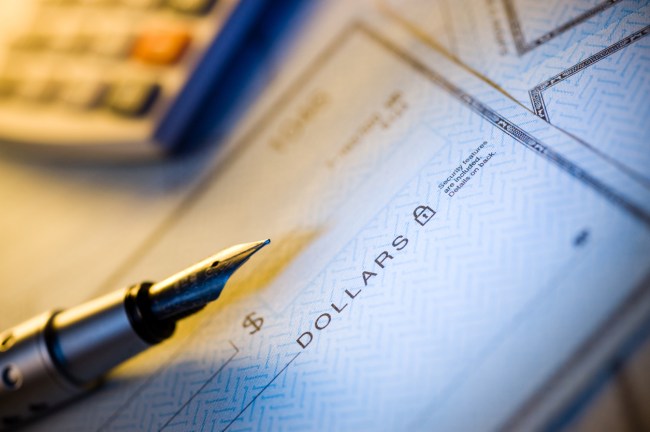 Thankfully, unused checks don’t have an expiration date. If you’re like me and can never find a new checkbook only to stumble upon a box filled with them immediately after ordering new ones, you can still use them as long as the account number they’re associated with hasn’t changed (they will, however, not be in numerical order, so depending on how you live your life, that could be a major issue).

It’s important to note the check must be entirely blank. If it has any writing on it—an amount, a signature, date, or funny comment in the memo section—then the check is like that Chinese food that’s been in your fridge for the past five days and should be avoided at all costs. In that case, your best bet is to just write a new check (for the record, if you make a mistake but only realize after sending it out, you can also ask your bank to issue a stop payment order and likely pay them a fee for the hassle you caused).

This should also go without saying, but if “void” is written on the check, that also means it’s no longer usable. Why? Well, because it’s been voided. Checks have a lot of rules, but as you probably know by now, a good chunk of them are pretty straightforward.

In the end, there’s really just one thing to keep in mind when it comes to dealing with checks: no funny business. If you abide by that one, you should be fine.