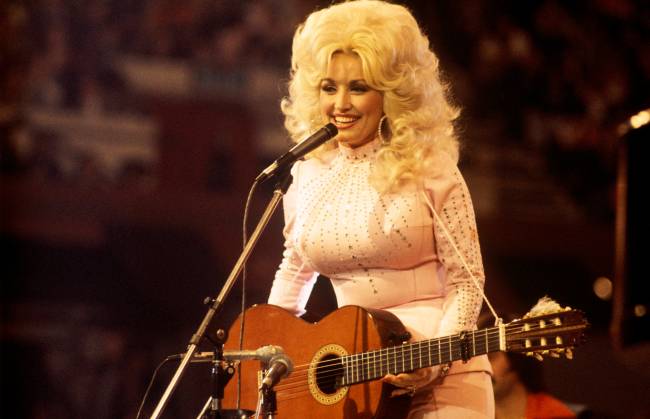 I’ve heard this rumor before. You probably have too. I don’t remember when or where but it went something along the lines of ‘Dolly Parton’s skin is completely covered in tattoos that are hidden under her clothes and that’s why she wears very specific clothing’. I have also heard this rumor about Fred Rogers aka ‘Mr. Rogers’ and never believed either of them but it turns out that Dolly Parton actually has some ink.

Dolly Parton addressed the rumors about her tattoos and squashed the idea that her whole body is covered in ink underneath her clothes but she did confirm that she’s got a few tats but tempered it by saying she’s ‘not a tattoo girl.’

I’m not exactly sure what would compel PEOPLE to ask the 74-year-old multi-talented musician and actress about her tattoos. It seems like an odd thing to ask Dolly at this stage in life. She’s a member of the Country Music Hall of Fame. She’s been nominated for Academy Awards, Grammy Awards, Tony Awards, and Emmy Awards. She has had 25 songs reach #1 on Billboard‘s Country Music chart, but they chose to ask her about tattoos in an interview? I won’t dwell on this. I’m glad they did. It’s just probably not the route I would’ve gone with a Dolly Parton interview.

Here’s what Dolly had to say regarding her real tattoos and how they came to exist:

She also shot down the chatter that she has them tattooed up and down her arms, while explaining that a medical issue led to her ink.

“My tattoos are pretty, they’re artful and they usually started out to cover some scar, not to make a big statement,” she said. “Ribbons and bows and butterflies are the things that I have. I was very sick for a while and I had to wear a feeding tube. It left a little indention in my side and I didn’t like it because I’m so fair that scars turn purple on me.”

“I like to make positives out of negatives,” she added. “I had a little beehive tattooed over it — a little yellow-and-brown beehive with a tiny little bee on top of the hive. The mouth of it is that little sinkhole.” (via TODAY)

She went on to say that she might get some more tattoos and ‘may just have to get covered with tattoos just so everybody could be right!’ which would be awesome. Something about the idea of 74-year-old Dolly Parton sitting in the chair getting ink just warms my heart.

Dolly has addressed the tattoos in the past but remarked they were ‘not where you can see them’ which only added to the intrigue. It seems like she’s finally clearing up the rumors a little bit but the rumors also seem like a fun distraction at this stage of her life. Dolly told People she just laughs them off every time the tabloids come up with something new.