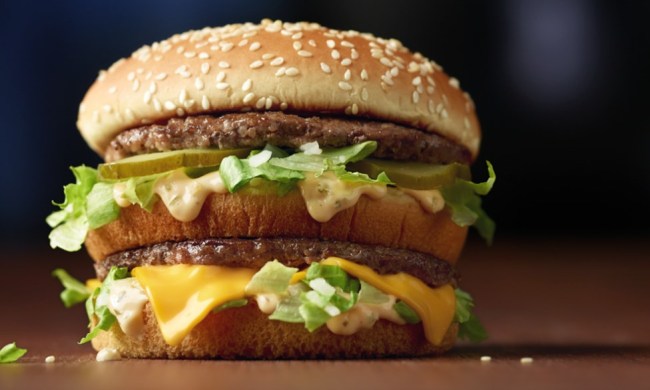 A Wisconsin man has eaten 30,000 Big Macs and that might not be the craziest part. The 64-year-old man has perfect health. And he has receipts. Literally. On Friday, Don Gorske ate his 30,000th Big Mac at the same McDonald’s in Fond du Lac where he devoured his first Big Mac and extended his unusual Guinness World Record.

Don ate his first Big Mac in 1972 and has been eating nearly 2 Big Macs a day ever since. He is the Cal Ripken of eating Big Macs. In his 46 years of eating Big Macs, he has only missed eight days when he didn’t eat his favorite burger. He missed one day in 1982 because a snowstorm shut down the restaurant. Then he missed his daily Big Mac in 1998 when his mom died. “She requested I not eat a Big Mac on the day she died, in remembrance of her,” Gorske said.

Gorske isn’t just eating McDonald’s everyday to set records, he is absolutely obsessed with Big Mac. He says Big Macs constitute 90-95% of his total solid food intake. Despite his daily McDonald’s habit, Don is in great health. “People make fun of me, but it never bothered me,” Gorske said. “At my last medical check-up I had low cholesterol and my blood pressure was perfect.” Take that haters.

If you are questioning Gorske’s record, don’t, because he has receipts. Don, who says he has OCD, has kept records of his prolific Big Mac addiction. Gorske, who appeared in the 2004 documentary Super Size Me, has cataloged thousands of receipts, wrappers, and containers of his Big Mac diet. “People like to see proof,” he said.

“We are lovin’ Don Gorske’s enthusiasm for our iconic Big Mac sandwich and appreciate his ongoing loyalty,” McDonald’s said. Before he left the McDonald’s where he ate his 30,000th Big Mac, Don purchased another Big Mac to eat when he got home because of course he did. Congratulations Don, why don’t you treat yourself to a Big Mac or better yet how about McDonald’s give this guy some free Big Macs?