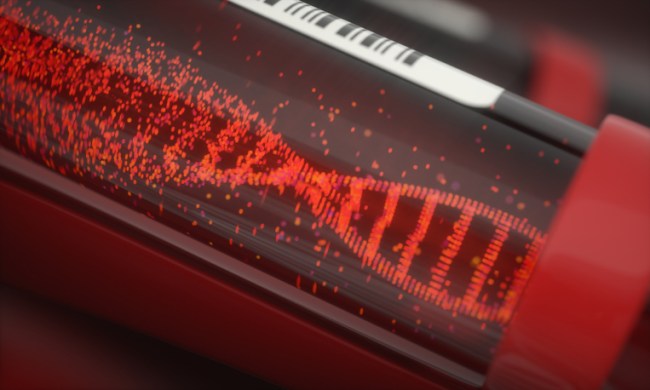 Serial killers like the infamous cannibal Jeffery Dahmer, who was convicted of several counts of murder back in 1991, may have lived forever if not for the fact that his “creepy sense of humor” got his brains bashed in by another inmate shortly after he was sent to prison. But had none of this ever happened and Dahmer was still trolling the streets of Milwaukee, eating people with rabid enthusiasm, a new study published in the latest journal Nature suggests that he could have lived a longer life.

Okay, so why in the hell would consuming the butchered remains of another human keep someone from an early grave, you might ask? Well, it’s not exactly the act of devouring human flesh and vital organs that appears to be the key to a prolonged existence. So, let’s not make plans to have anyone’s liver for dinner just yet, okay Hannibal? It’s actually the blood, the juice that carries oxygen throughout the body, that some mad scientists claim has health benefits. So, start sharpening those hatchets, boys!

Researchers from the University College of London have found a bizarre connection between animals that feast on the blood of younger prey and their uncanny ability to ward off destructive diseases like cancer and heart disease, which commonly develop later in life.

The study found that the blood of younger animals provided significant health improvements when injected into older animals. Presumably, this is only the case when the younger animals are not infected with some nasty, incurable disease that offers its own terminality.

Researchers believe their findings could lead to the ultimate anti-aging treatment.

“A lot of people regard aging as ‘natural’ and that therefore you shouldn’t interfere with nature,” geneticist and lead study author Linda Partridge told The Sun. “But we’ve always considered it an ethical imperative to cure illness where we find it.”

But before any of you run off and go full-blown Leatherface on a grade school, there are a few crucial details to consider.

It is important to point out that it is not necessary to drink blood by the cup full to receive its maximum benefit. In fact, the body is not equipped to drink more than a couple of teaspoons of blood, according to report from India Times. Any more than that, the article goes on to explain, could spawn an iron overload (hemochromatosis) and can cause the person to develop problems with his or her liver, heart, and pancreas. Drinking too much blood has even been shown to cause diabetes, the article states. So, yeah, it might be safer to stick with fast food and donuts.

The report also indicates that consuming animal blood as opposed to the human variation may be more beneficial and less hazardous. But there are still plenty of risks associated with going this route. Animal blood is more likely to contain bacteria that can cause infections and bring about vicious diseases and even death, while human blood may only carry vile diseases such as HIV and hepatitis. So pick your poison wisely. Perhaps you might want to just start ordering your steaks medium-rare.

But there are some media outlets that say supplementing the body with blood for its anti-aging properties is a scam. A recent article from the fact-checking website Snopes says the claims about drinking young people’s blood providing health benefits is completely “false.”

The site argues that the reports over this study are misleading for three reasons: First, the study did no involve “drinking blood,” only transfusions. Secondly, it “did not itself investigate blood transfusions for human longevity purposes but rather included a discussion of blood transfusions in animal studies as part of a larger review.” And lastly, the study results were attributed to “components of blood” not to blood itself. The piece goes on to explain that, “no study has concluded that “drinking” a “young person’s blood” provides anti-aging health benefits.” In fact, as we mentioned above, this practice may actually pose a greater detriment than offer any healing powers.

We don’t advise it.