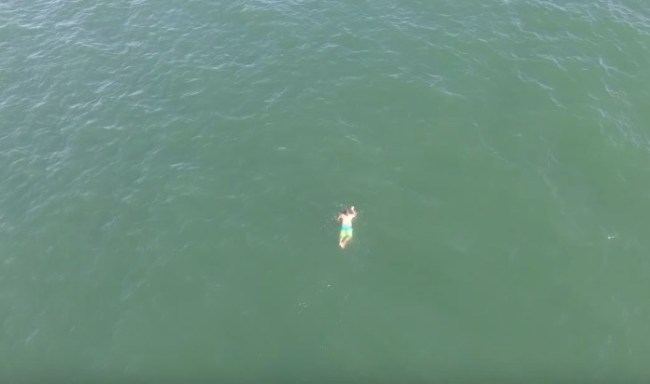 On Wednesday, a man from North Carolina attempted to elude Surf City Police by diving into the ocean and swimming away. 20-year-old Zachary Kingsbury allegedly fled and dove into the water after he was stopped by police and the cops spotted illegal contraband inside of his car.

Instead of swimming after Mr. Kingsbury, police fired up the drone to follow him as he swam out into the Atlantic Ocean in an attempt to evade capture. That’s around the time cops noticed a massive shark swimming alongside Zachary Kingsbury. Police say the incident turned into a ‘rescue operation’ after they spotted the shark stalking Zach:

“At that point, the operation became a rescue operation,” police said in a statement.
But as police were trying to save Kingsbury, they noticed a shark swimming near the man, drone footage showed.
Police were able to nab Kingsbury about 7:45 p.m., according to the Charlotte Observer.
“I would’ve drowned after 10 minutes…dude’s an animal,” a witness wrote in a Facebook post.
Kingsbury was charged with resisting arrest, obstructing an officer, possession of drug paraphernalia, methamphetamine, and possession of marijuana of up to a half an ounce. via Fox News

There’s no evidence that the shark was going to take a bite out of him, but I think we can all agree that Zachary Kingsbury was a fuck ton safer outside of the water and in handcuffs than he was swimming alongside a 6-foot shark…Right? (h/t Fox News)