Drunk Soccer Fan Falling Down An Escalator Makes Late, Great Run At Video Of The Year 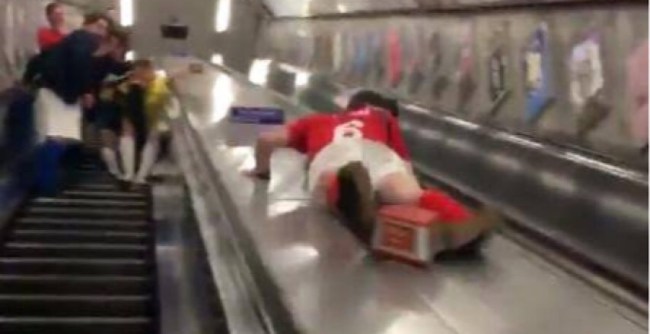 Did you have a terrible year? Well, this video encapsulates your awful 2017 in six glorious seconds. This drunk soccer fan falling down an escalator may ease the hurt of your miserable year as you find the comfort of witnessing someone having a more dreadful 2017 than you. This video of the year contender could be the one rare occasion where getting smashed in the nads is not the worst part of someone’s day.

Top night last night, but this has to be the highlight 😂😂😂 pic.twitter.com/yMqDvOoVML

I guess you could say…

Somebody is gonna need an icepack. Wow. He turned into a eunuch before he made it to the first floor. For those who say that stupid people should not reproduce, I don’t think you need to worry about this poor chap. The saddest part of this video is that after he was flung in the air, he landed on the up escalator with his bruised body and even more bruised ego as the stairs going up continually batted him in the chin.

At least only his dear, yet laughing friends and only 21.2 million people around the world saw this whole embarrassing ordeal. One of his caring friends was able to stop laughing at his bud’s castration for a few seconds and provide an update. “For everyone that’s asking, yeh he’s alright. Few cuts and bruises but he’s all good 😂.” Easy for him to say, he didn’t have his twig and berries mashed and then broadcasted on the internet for the entire world to point and laugh.

Fuuuuuuuck me that blew up 😂😂 for everyone that’s asking, yeh he’s alright. Few cuts and bruises but he’s all good 😂