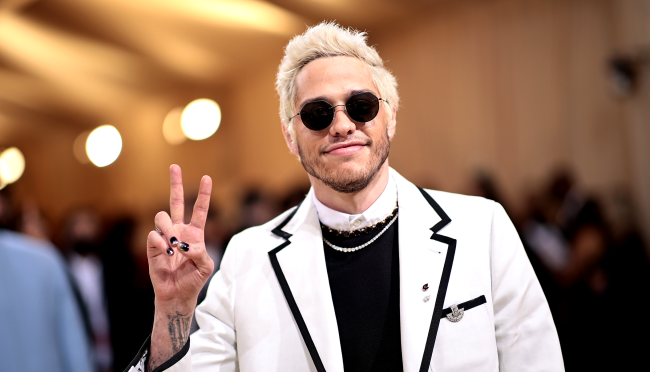 Comedian Pete Davidson is not an unattractive man, but he’s certainly no threat to overtake Paul Rudd as 2022’s Sexiest Man Alive. So how is it that the 27-year-old Saturday Night Live cast member is so successful when it comes to dating beautiful, famous women?

When asked about that very topic in the past, Davidson has said that he is “just very, very honest.”

Related: Pete Davidson Reveals His Secret To Approaching Women He Is Interested In Dating

There’s got to be more to it though, right? There has to be more.

Monday night during her appearance on Late Night With Seth Meyers to promote her new book, My Body, model Emily Ratajkowski attempted to explain Pete Davidson’s appeal to so many women.

The conversation began when Meyers showed Ratajkowski a modeling photo she did recently that also featured Davidson.

pete davidson for the fall/winter moose knuckles campaign (2021)! look at him pic.twitter.com/Ge6QwRKX2h

“He’s a professional,” Ratajkowski told Seth Meyers about the photo shoot. “First of all, you should know that about Pete. and he got into character, in a real way… I was impressed.”

Meyers then asked her about what it’s like when she shows up to a shoot and there’s “the guy who’s there to be the ‘not a model’ in the model shoot,” referring to Davidson.

“I think you’re being a little mean,” Ratajkowski replied. “He’s got the height. Obviously women find him very attractive.”

She continued, “I feel like only other men feel that way. Guys are like, ‘Wow, what’s that guy got?’ and I’m like, he seems super charming, he’s vulnerable, he’s lovely, his fingernail polish is awesome. He looks good!

“Good relationship with his mother… we love it. It’s hard to find ’em.”

I still don’t get it.

Coincidentally, Pete Davidson also appeared on Late Night With Seth Meyers on Monday and talked about modeling alongside Emily Ratajkowski.

“We didn’t plan on having two fashion models on the same show,” Meyers joked. “Especially two who have collaborated.”

Davidson then talked about how, unlike the other two people in the photo, who are professional models, he’s just an idiot.

And here he is talking about his tight relationship with mom, which apparently, as we have now learned, is to beautiful famous women what freshly cut catnip is to felines.