How Would You Spend Your Final Hours If The World Does Come To An End This Weekend? 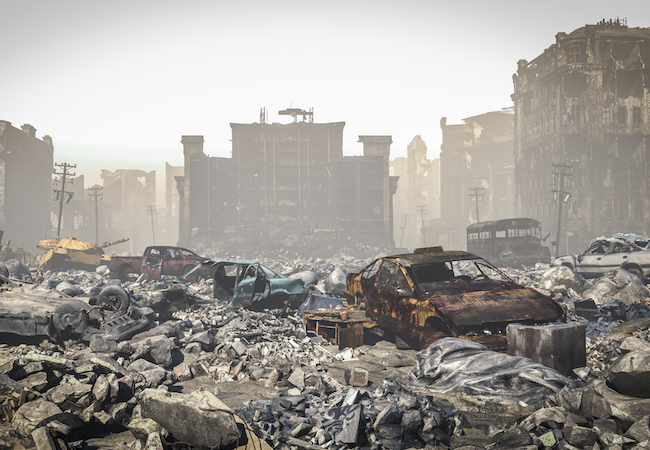 Nobody really has a clue how it’s going to go down. The day may begin just like any other that we’ve lived up until this point. The sun would come up slowly from the East, the birds would be chirping outside, and you’d be in bed with the usual twinge of a hangover trying to remember what the holy hell happened the night before.

But then maybe, just shortly after taking your morning leak, a national alert from the White House would come across your cell phone that reads: The world is going to end. There is no escaping. We’re all doomed, doomed, doomed. This is not a test.

From there, the trending news of the week would be that a massive, grudge humping asteroid is, in fact, about to smash into Earth and turn it into a heaping pile of space dust. Or then again, maybe the story is that a man named Jeebus has come back to exact his revenge on a godless planet in a way that’s going to make the Book of Revelation sound like a lullaby. How humanity is going to be wiped from the face of this spinning rock of pain isn’t going to be important.

The only thing that’s going to matter is that it’s happening and we’re all about to die.

Well, make sure those cell phones are fully charged up this weekend, boys. Because there’s a possibility that we’re all going to receive the alert of the damned in the next day or so. It seems that the Mayans may have screwed the pooch when they prophesized about doomsday coming on December of 2012, and the real cataclysmic demise of the planet will actually take place this weekend – Sunday, June 21 to be exact.

So, you know, don’t bother getting dear old dad anything for Father’s Day. That bastard isn’t going to need more stuff where he’s going. At least not according to scientist Paolo Tagalogun. He has reworked the math and says the Mayans were several years off when they predicted the end of days. But (dun-dun-dun-dun) they’re here now.

Considering everything that’s happened so far in 2020, I wouldn’t be surprised if this white coat Nostradamus is onto something, and we’re all about to be sucked into a dark abyss. There’s been sickness, economic ruins, civil unrest, and the price of beef is getting ridiculous.

At this point, I say bring on the fire and brimstone, baby. Go ahead and unleash all of the death and destruction that we ungrateful slobs have had coming to us for a long time. Look, it’s not that I’m a necromaniac or even a pessimist. It’s just there doesn’t appear to be any foreseeable end to the madness we’ve been enduring this year, and the decline of civil society is probably only going to keep spiraling further into the proverbial crap-shack of misery.

But don’t take my word for it. Smarter people than I say it’s true. Before renowned scientist Stephen Hawking checked out a couple of years ago, he was out there preaching the coming of all kinds of apocalyptic scorn.

That dude, arguably one of the smartest people to ever live, fully understood that the planet was doomed to some sort of Armageddon, and it wasn’t going to take long before we got there. I mean, he put a timeline of about 1,000 years on it, but still. He emphatically suggested the end was coming and in the form of either flaming space rocks, pandemics, robot uprisings, or Donald Trump.

We’ve had more than a few close calls lately. So, yeah, maybe we have reached the end of the line.

But wait. Regardless of how muffed up the world is right now, I think I speak for most of us when I say nobody is ready to die. We all presumably have shit that we still want to do, places all over the world that we’d like to see, and goals to accomplish. I’ve been writing a novel for the past few years, and if the Mayans make all of that work a waste of time, I will not be pleased. To be snuffed out right now without anyone left to tell our tale would be the cruelest joke that this relentless universe of ours could dish out.

But, as we should know by now, the universe doesn’t really give a damn what we want. As far as it is concerned, we’re all just meaningless pieces of stardust and perhaps no longer deserving of our idiot brains, boners, and the air that we breathe.

If this is it, as the great poet Huey Lewis once said, then, if nothing else, we must go out as happy as possible. We can’t just sit around thinking about how 2020 has sucked big, hairy moose balls and wait for death to come-a-knocking.

We’ve got to make the most of the time we have left in this rotten world. So this begs the question: How would you spend your final hours if you learned that the world was definitely going to end this Sunday?

That’s a tough one, right? I mean, it’s not like there’s a whole hell of a lot of time to make grand plans or anything. Most of us do not have the savings or credit to make a dent in those elaborate bucket lists of ours within the next 48 hours.

I’m damn sure not going to publish that book or travel the world or sleep with a famous supermodel. And let’s face it, the toilet paper hoarders of the corona debacle are going to come back with a vengeance and make quite a scene out there before the coming of the kill switch.

The streets would be chaos incarnate, all leading to the gateway to hell.

Meanwhile, with each passing minute, we would be inching closer to being no more. Think about it. Knowing it’s all about to come crashing down, what will you be doing when the death rattle comes?

The cliché in this scenario is that those of us with families would make the decision to be carted off into the great beyond with our loved ones by our sides. And there might be some truth to that, at least on day one.

Come the second day, however, after we’ve finished hugging and kissing those who matter to us and we’ve made peace with the fact that it’s all about to go dark, I feel the situation is going to get interesting.

Never mind the panic, fear and sheer lunacy that’s going to erupt. That’s a given. Yet, those of us still trying to live it up a little in spite of knowing our expiration date are going in a different direction. There’s going to be lots of drinking, screwing and gluttony before the lights go out on my end, I can promise you that.

What guy doesn’t want to take his last breath in the arms of a beautiful woman? Or even an ugly one? And if there just so happens to be pizza and a bunch of beer in the vicinity, well, all the better.

Listen, it’s not like there’s any reason to uphold some illusionary moral code and keep on trying to be the best man you can be in this situation. We’re on the verge of nothingness, after all, a place where all that once mattered no longer does.

Naked and drunk is how I’m going out. How you choose to do it is up to you. But you had better get busy. Because if this Tagaloguin fella is right, it’s curtains for us all. And even if it doesn’t happen now, it’s coming.

So, go have some fun.