Marvel Studios Has FINALLY Released The First Look At ‘Eternals’ 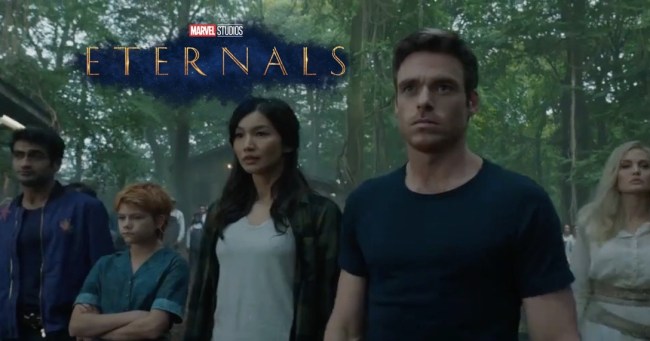 RELATED: Marvel Studios’ President Is Making ‘Eternals’ Sound Like It’s Going To Be Their Best Movie Yet

In addition to the first-look photos, the recently released Marvel Studios sizzle reel also unveiled the official titles and logos of some of the studio’s upcoming features. Not only did we get out first-look at Eternals, but Marvel Studios also unveiled the title for the Black Panther sequel, Black Panther: Wakanda Forever, and the title of the Captain Marvel sequel, The Marvels.

The Disney-owned studio also shared the official logos for those two films, in addition to Guardians of the Galaxy Vol. 3, Thor: Love and Thunder, Ant-Man & the Wasp: Quantumania, and Fantastic Four.

The Marvel Cinematic Universe will resume with the release of Loki season one on June 11, followed by the release of the long-delayed Black Widow on July 9.

Eternals is just one of many Marvel Cinematic Universe films due out in 2021, as Black Widow, Shang-Chi and the Legend of the Ten Rings, and Spider-Man: No Way Home will be released this year. 2022 will also be chock full of MCU content, as Thor: Love and Thunder, Doctor Strange in the Multiverse of Madness, and various other Disney+ series such as Moon Knight, Armor Wars, Secret Invasion, and She-Hulk are set to be released.

RELATED: Marvel Studios’ ‘Eternals’ Will Span Over 7,000 Years And Will Introduce The Deviants