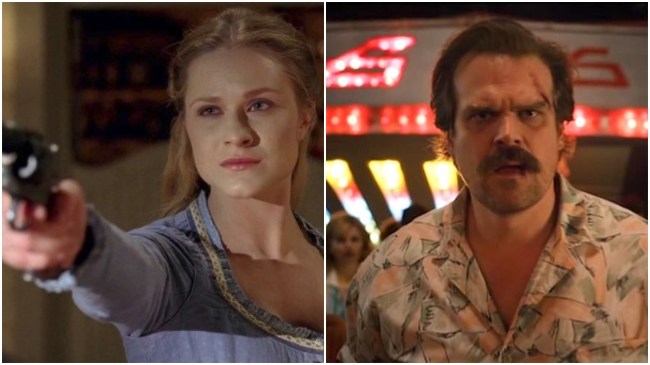 Can I just say one thing? Thank God for Evan Rachel Wood.

If it weren’t for Evan Rachel Wood, how would the millions of women out there know what to look for in a man?  How would they know that obviously depressed, slightly manic, clearly unstable Chief Jim Hopper from Stranger Things is probably not the ideal life partner?

How would us men know that “extreme jealousy and violent rages are not flattering or sexy?” And here I was, all this time, living my life thinking women will fall for me if I secretly read their text messages and punched Kyle-sized holes in their walls. So thank you, Evan Rachel Wood, for we’d be lost without you.

If you can’t tell by now, Westworld actress Evan Rachel Wood had a Twitter take about Stranger Things Police Chief Jim Hopper that essentially amounted to her warning women not to date anyone who resembles this fictitious character from a show about interdimensional, children-led warfare.

Yes I am aware its “just a show” and its set “in the 80s” even though this stuff was unacceptable then too, but thats exactly my point. Its just a show and this is a gentle reminder not to fall for this crap in real life. Red flags galore.

Look, I understand the sentiment of what she’s trying to say: toxic men are bad. And on that, I agree with ERW. But to use a literally fictitious character in a fictional show as your trojan horse of genuine relationship advice is bordering on laugh-out-loud hilarious.

This would be akin to me tweeting: “Hey fellas, don’t trust beautiful blonde women like Dolores from Westworld or they’ll murder you in your sleep as they advance their plan to take over humanity!”

Well, no fucking shit she would — that’s the way the character was intentionally written: to be murderous. And Hopper was intentionally written to be an over-aggressive and annoyingly jealous mess — no one (except Evan Rachel Wood, apparently) is pretending that he’s the ideal archetype of male behavior (lest we forget he merely adopts an orphan and gives up his life for the sake of humanity).

Hopefully, after she’s finished binging Stranger Things, Evan Rachel Wood makes her way to the original Star Wars trilogy so she can let everyone know that they should be a better father than Darth Vader.