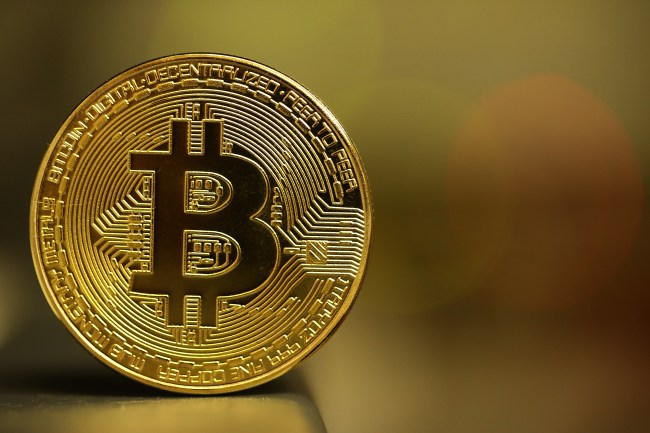 LONDON, ENGLAND - OCTOBER 23: A visual representation of the digital Cryptocurrency, Bitcoin on October 23, 2017 in London, England. Cryptocurrencies including Bitcoin, Ethereum, and Lightcoin have seen unprecedented growth in 2017, despite remaining extremely volatile. While digital currencies across the board have divided opinion between financial institutions, and now have a market cap of around 175 Billion USD, the crypto sector coninues to grow, as it sees wider mainstreem adoption. (Photo by Dan Kitwood/Getty Images)

Cryptocurrency is so hot right now. So hot that Bitcoin is being offered as a prize for a FanDuel fantasy football tournament. That’s right, instead of cold hard cash, FanDuel will reward winners with Bitcoin as the prize. The massively popular daily fantasy sports site will hold the first-ever “Bitcoin Bowl,” FanDuel announced on Tuesday.

“When your team makes the playoffs, the sky’s the limit. And from what we’ve read online, Bitcoin investors know exactly how that feels,” FanDuel said in its announcement. “So, for Week 1 of the playoffs, we’re giving you two chances to hop on the ultimate bandwagon and play to win some bitcoins of your own.”

FanDuel will give away one Bitcoin to the winner of its free NFL Wild-Card weekend tournament, which is a single-entry. There’s a multi-entry $3 contest that has a tiered payout –- 1st place will get two Bitcoins, 2nd place will get .5 Bitcoin, and 3rd and 4th place will get .25 Bitcoin.

“FanDuel has always sought to deliver the most unique and rewarding experiences or prizes to our users,” said FanDuel CFO Andy Giancamilli in a statement. “In awarding Bitcoin, we’re recognizing that most of our users are early adopters of technology and have a significant interest in cryptocurrency.” At the time of publication. one Bitcoin is currently valued at $13,968, but it could be worth $20,000 by the weekend or $600.