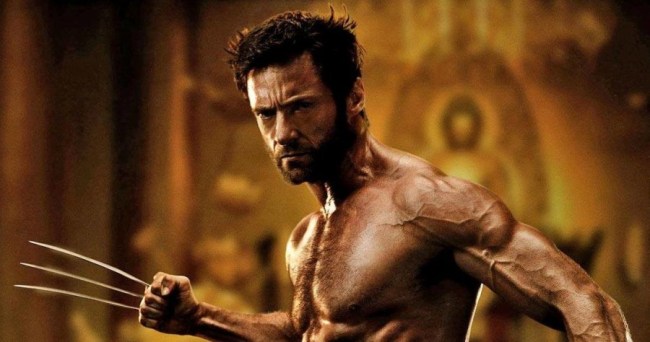 When you look at Eddie Davenport now, you would never imagine that he was bullied in high school over his weight and was even called a “fat kid.” Funny how things work out in real life after high school because now Eddie is a ripped actor, model, and stunt double for Hugh Jackman.

When Eddie was growing up, his single mom worked three jobs to provide what she could for her family according to Men’s Health. Mostly, Eddie’s diet consisted of “whatever was cheapest,” which meant Easy Mac, Top Ramen or Cup-A-Noodles. Though he wasn’t obese, that didn’t stop kids from teasing him and calling him fat. Eddie was so self-conscious of his body that he wouldn’t even let people take photos of him. In high school, girls would say things like, “He’s nice and funny, but I don’t want to date the fat kid.” The joke is on them because Eddie is now super in shape and famous.

When Eddie was in college, his sister saw what he was dealing with and she came across the book Body For Life and told him to check it out. Eddie read the entire book in one night. With a gameplan and stacked with motivation, Eddie was ready to make his incredible body transformation. Even his sister was ready to join Eddie in carrying out the book’s exercise and diet program with her brother.

The first step Eddie took was to ditch processed foods in favor of fruits, vegetables, whole grains, and lean meats, but he did give himself a cheat day every Sunday. Davenport alternated between weight-training days of upper and lower body days as well as cardio days. In only four months Eddie dropped an amazing 52 pounds, going from 230 pounds to 178 pounds. These days, Eddie is up to as much as 195, but it is a lot of lean muscle.

But that was only the beginning. Davenport still had dreams of being an action star, so when an opportunity in Orlando came up to work for a dinner show, “kind of like Medieval Times but with pirates,” he took it. It was there that Davenport learned basic stunt moves, like sword fighting, hand-to-hand combat, and high falls. Shortly after, he got another opportunity to open a show in California. There, he met people who worked in movies and television. He also faced some harsh realities. “I met with agents, and they asked me what I wanted to do, and I said I wanted to be in action movies. They literally asked me to lift up my shirt, saw my stomach, and told me I wouldn’t make it, because I was just average,” said Davenport. “I was just skinny; I wasn’t muscular.”

Davenport said he picked up a copy of Men’s Health and on the cover was Ryan Reynolds, who had a similar body type to his at the time—so he opened the issue to find out exactly what he needed to do to get cut like the cover guy. “I looked at what he ate and what workouts he did, and tried to follow that. In the issue, he said he did ab exercises first, because it was meditative. I started doing that, too, and to this day I still do my ab exercises before I start a workout. It really is meditative,” he said.

Davenport got a big break when he landed a stunt double opportunity on the movie Real Steel where the lead actor was Hugh Jackman. That got Eddie’s foot in the door and he has been on a roll ever since. Eddie has been featured as a stunt double in Captain America: The First Avenger, X-Men: First Class, Ray Donovan, True Detective, True Blood, Star Trek: Into Darkness, The Mentalist, Chuck, CSI: Miami, and Real Steel. He was also Hugh Jackman’s stunt double in the massively successful Logan.

Eddie says he works out six days a week, alternating between cardio and strength training. “Windsprints are the best, especially if you’re trying to shred up and lean out,” said Davenport, “They make you feel like you’re going to die, but they really work.” After 10 years of experimentation, Eddie has devised his best diet plan. He eats between six to eight small meals a day. He tries to stick to “lean meals,” such as grilled chicken, quinoa, and asparagus. Eddie also found that intermittent fasting has been a vital factor in losing weight and sets aside 16 hours to fast. Eddie has ditched his cheat day because his clean eating “rejects anything that is outside of my diet.”

So how can you get ripped and be Hugh Jackman’s stunt double? Eddie has some advice. “It’s all about your mindset. You need to figure out exactly what it is you want it to be and always keep that in your mind,” he said, “And remember that the process takes time, so don’t get discouraged when you aren’t seeing any results. Just trust the process and stick to it.” That’s why you never let the words of dummies in high school get you down and only use it to motivate you to be your best self.