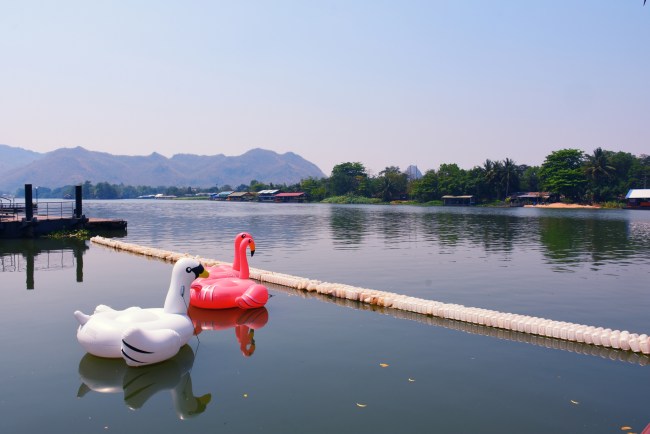 Two people riding a massive inflatable swan pool float needed the FDNY to swoop in and rescue them after a fast-moving current sucked them and their pool toy out into the river. The FDNY eventually caught up to them around 55th Street and East River after reports of a huge swan pool toy came in.

The FDNY shared details about this incident on their Instagram:

At 3:39 pm today, #FDNY Marine and land units responded to the East River and E 55 St, Manhattan for reports of multiple persons in the water. FDNY #Marine4 rescued two persons from the water after their inflatable swan pool float became overcome by a fast moving current and was met with heavy marine traffic. The two individuals were transported ashore onboard #Marine6 where they were evaluated by EMS.

FDNY urges New Yorkers to always take precautions when swimming or entering the water surrounding our city. Only enter the water where swimming is permitted and where lifeguards are on duty. See more #FDNYSmart tips for a safe summer at fdnysmart.org

It’s not clear where they launched the pool toy from and which currents sucked them up into the heart of Midtown but this 100% feels like one of those situations where if they never made the announcement of this rescue it likely would’ve disappeared forever but now that a bunch of bored (and possibly drunk) Upper East Siders know that jumping into the East River with a pool float is a possibility this is almost certain to happen again.

A couple of years ago I went to a bachelor party in Coxsackie, New York and we rented this massive house on the Hudson River. I brought my Bernese Mountain Dog with me instead of leaving her in the city. The house had this massive T-Shaped dock that was like 100-long and 75-feet-wide.

At some point, I was out there with a buddy (who is a doctor) and my dog slipped off the dock and fell into the Hudson. He quickly asked ‘can she swim?’ and I said ‘no’ but what I meant to say was ‘yes, she can swim fine, but she doesn’t like to.’ So I try and pull her back onto the wet dock, slip and fall into the river myself, swallowing a bunch of water on the way in. I eventually push my dog around the edge of the dog, she was panicking because she couldn’t see land. Once she saw the river bank she was off and fine. I crawled back onto the dock in my soaking pants and long-sleeve shirt to find our friend John in his underwear ready to dive in and rescue us. Apparently he’d been disrobing the entire time ready to dive in. Real timely with the rescue there, John. Super timely.

I’m saying this because for the next two weeks I was 100% convinced I was going to come down with the Coxsackievirus, aka Coxsackie Fever, and this was in a relatively clean part of the Hudson. I simply cannot fathom ever getting into the water near the East River voluntarily unless you fully plan on getting sick. I didn’t get sick, thankfully, but I have to assume there’s at least an 85% chance you’d come down with something nasty if you were ever to fall into the East River in the heart of the City.