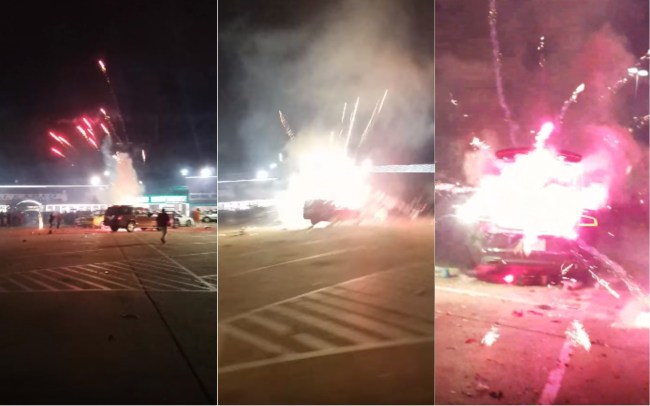 We take you to a strip mall in Houston, Texas where someone threw a firework into Hurara Hassan’s Dodge Charger. Inside the trunk, there was $140 worth of Roman candles, sparklers, and firecrackers that were previously unexploded. Someone threw a lit firework into the Charger and KABOOM!!! Fireworks shot in every direction, but that didn’t deter amateur videographers from getting close enough to capture video of the impromptu fireworks show. Thankfully, nobody had their face blown off.

“I was scared because my girl was in the car,” Hassan told KTRK-TV. “I ran to go see, but luckily she ran out.” On the bright side, Hassan’s car now has heated seats. Hassan said his car is repairable and the insurance company is definitely going to look into this bizarre claim as possible insurance fraud. Nevertheless, Hurara maintains a positive outlook. “I’ll go do the fireworks again,” he said. “But I’ll make sure the trunk is closed next time.” Jason Pierre Paul gave this fireworks celebration one-and-half thumbs up.