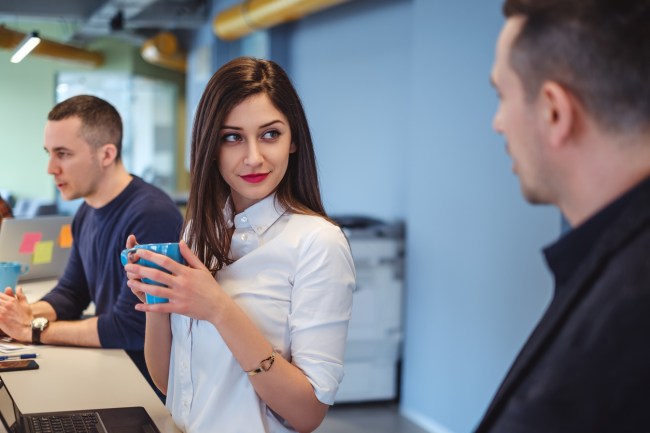 A perplexing question that has plagued men for ages: “How do I know if she is flirting with me?” Guys, in general, are not exactly proficient in accurately identifying when a woman likes them or is showing romantic interest in them. For some men, they honestly believe a woman wants to drop everything and marry them if she laughs at one of his jokes or hits “Like” on a new Instagram photo of his Basenji puppy named “Benji.” But science is here to help men decipher the complex language of female flirting and how to know if a woman is attracted to you.

Researchers examined six scientific studies in an attempt to identify “facial expression of flirtation and its effect on men.” The new study, published in the Journal of Sex Research (How do you go about getting a job there?), found there is one specific facial expression that men should look at as a potential cue that a woman is flirting with them.

The researchers found that “a few expressions were identified by most (if not all) men as flirting.” The most effective non-verbal, non-physical method of signaling flirting is when women turn their head to one side while tilting it down slightly, had a slight smile, and their eyes were facing toward their “target,” AKA romantic interest. That flirty face is said to be a “clear cut message to men that the women were interested,” according to Yahoo.

“It has a unique morphology, and it’s different from expressions that have similar features – for example, smiling – but aren’t identified by men as flirting expression. Our findings support the role of flirtatious expression in communication and mating initiation,” Omri Gillath, professor of psychology at the University of Kansas, told SWNS.

“Potentially it was [this] combination that made… the expression of some women more effective and recognizable than others,” Gillath, who is a co-author of the study, told Yahoo Life.

“It involves expressing more than one sign that you’re romantically interested in someone,” body language expert Blanca Cobb told Yahoo Life. “It’s the head tilt, chin down, eyes up and smile — that’s four cues. It’s a really good one when it comes to women.”

“Our findings support the role of flirtatious expression in communication and mating initiation,” Gillath said. “For the first time, not only were we able to isolate and identify the expressions that represent flirting, but we were also able to reveal their function — to activate associations related with relationships and sex.”

Dr. Monica Moore, a psychologist at Webster University, conducted a study titled “Nonverbal courtship patterns in women: Context and consequences.” Moore identified 52 non-verbal behaviors that women use to signal that they are interested in a man.