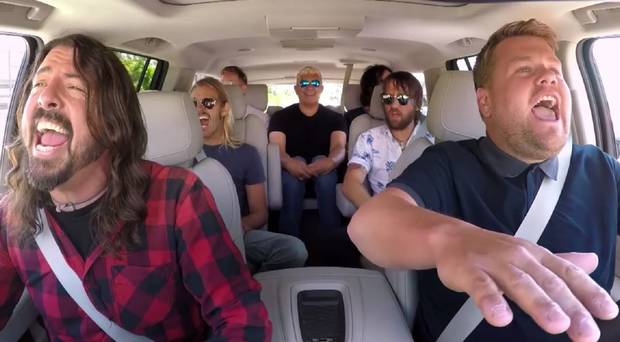 Via The Late Late Show with James Corden

The Foo Fighters joined James Corden on The Late Late Show‘s signature segment “Carpool Karaoke” last month. However, as much fun as it looked, the great American rock band found the whole experience “a little uncomfortable.”

During their appearance, Dave Grohl and the boys sang Foo Fighters classics such as “All My Life,” “Best of You,” and “Learn to Fly.” They also rocked out to their latest single, “The Sky Is a Neighborhood,” from their new album “Concrete and Gold.” Unlike most music artists, the band actually wasn’t excited to perform their songs for self-promotion. The band was hoping to use the karaoke platform to sing other artists’ songs in the condensed 12-minute segment that had the band riding around Los Angeles. “I don’t mind singing my own songs at Glastonbury or The O2 but if I had to sing you a song right now I’d be too embarrassed,” Grohl told NME. “I could do that all day. We did The Ramones, and Rick Astley, but they didn’t use it. I don’t know why.”

Guitarist Pat Smear echoed Grohl’s sentiments and said, “singing other people’s songs would have been easier.” Smear added that recording the simple segment got tiresome. “By hour three in dude’s car it got less fun,” Smear said. “It kinda went on. When we stopped at Guitar Centre, that felt like we were done, but it was like ‘this is halfway.’”

Grohl said the segment got “a little uncomfortable”, but didn’t doubt that James Corden was a genuine music lover. “Oh he definitely is [a music lover],” Grohl said. “And he’s a very nice guy.” So don’t expect the Foo Fighters to be doing another “Carpool Karaoke” segment anytime soon.