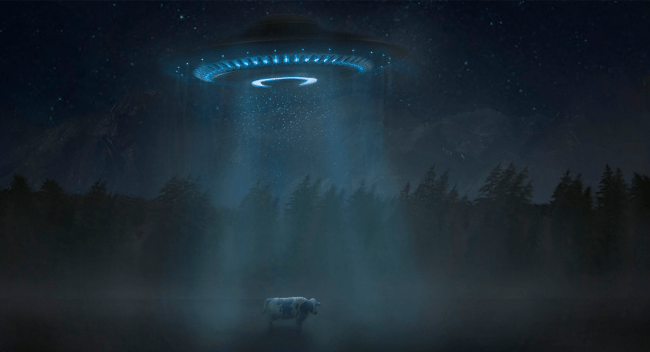 Back in 1996, one of the most infamous UFO and alien reports emerged from Varginha, Brazil. Called the Varginha incident and often labeled as “Brazil’s Roswell,” several witnesses claimed to have seen alien creatures and experienced numerous UFO sightings over a period of multiple days.

They reported that the alien was around 5 feet tall with a large head, large red eyes, a thin body with oily brown skin, and V-shaped feet. The women believed that the alien had been injured or was sick due to it appearing to be unsteady on its feet.

When they reported what they had seen to the sisters’ mother, they went back to the scene and the mother reported smelling a strong ammonia-like odor and seeing some footprints, but no alien.

A few days after their sighting, another alien-like creature was found lying on the side of a road. This creature was reportedly picked up by three military vehicles. A janitor at a local zoo also reported seeing a similar scene around that time.

In the book UFO Crash in Brazil, witnesses claimed that the two alien-like creatures were taken to a clinic for examination.

Subsequent reports around that time included one in which farmers claimed to have witnessed a UFO hovering over their cattle for 40 minutes.

The Brazilian military, after investigating the incidents, claimed the sisters and their friend only saw a homeless, mentally unstable man known as Mudinho who covered in mud due to recent heavy rains.

They also claimed their military trucks were in the area as part of their normal schedule and that the reported aliens in the hospital were nothing more than an expectant couple who had dwarfism.

In the documentary, locals reported seeing a cigar-shaped UFO slowly fall from the sky and crash in a field.

“It looked like a washing machine struggling, fighting to keep its altitude,” eyewitness Carlos de Souza reported in 1996. “The side of it was completely torn and it had white smoke coming out. It wasn’t black smoke like from a fire. At the time I thought it was like an aircraft in trouble, an aeroplane, so I decided to follow it.”

De Souza and the filmmakers returned to the scene this year.

He explained, “When I arrived at the site on this very spot, I observed a lot of debris, pieces. And when I got out of the car I immediately smelled ammonia, like rotten eggs. A very strong smell, so strong that I had to cover my nose with the shirt I was wearing. My eyes got watery.”

De Souza also reported, “I saw a piece, it looked like it was aluminum. I took a sheet. I took a small piece, it was very light. Crumpled it, but when I released it, it went back to its original shape.”

The three women also revisited the sight of their encounter with Fox.

She added, “I do think it was a being from another planet.”

Also in the film, an anonymous whistleblower claims he was involved in transporting the body of a creature from Humanitas Hospital in Varginha to ESA Army Base.

“There were doctors, people carrying clipboards, analyzing. It looked like they all seemed scared of it,” he claimed. “And when I looked I saw something different — a different creature, with the skin very oily, a lot of oil, like silicone. Seeing that I got scared,” adding, “What led me to believe that it wasn’t a human being was the [V-shaped] foot.”

He also claimed a soldier was present with a film camera so there is “for sure” video of what occurred.