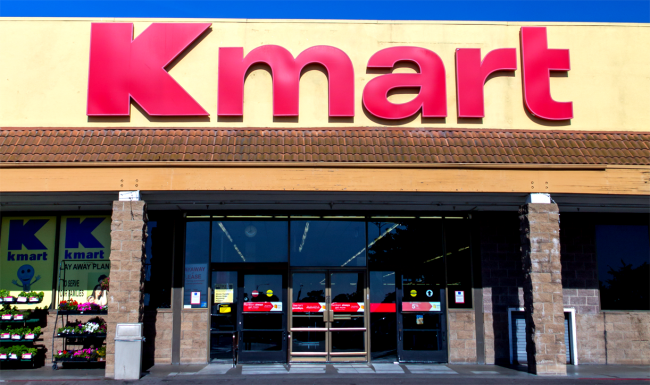 Attention Kmart shoppers! We are losing another one. On April 16, the Kmart located in Avenel, New Jersey will be closing its doors for good.

When that happens, there will be just three Kmart stores left in America, in Westwood, New Jersey; Bridgehampton on Long Island, and Miami.

It also means that since 1994, Kmart will have closed or sold off 2,320 stores in the United States.

When the Kmart in Avenel, New Jersey, closes this week, the number of U.S. locations – once over 2,000 – will be down to three.

Its demise is attributed to the rise of Walmart, Target and Amazon. But some experts say Kmart could have avoided this fate. https://t.co/NzJLimW9k2 pic.twitter.com/ZRVw0GeWQt

In its heyday, Kmart sold product lines endorsed by celebrities Martha Stewart and Jaclyn Smith, sponsored NASCAR auto races and was mentioned in movies including “Rain Man” and “Beetlejuice.” It was name-dropped in songs by artists from Eminem to the Beastie Boys to Hall & Oates; in 2003, Eminem bought a 29-room, suburban Detroit mansion once owned by former Kmart chairman Chuck Conaway.

The chain cemented a place in American culture with its Blue Light Specials, a flashing blue orb affixed to a pole that would beckon shoppers to a flash sale in progress. Part of its success was due to its early adoption of layaway programs, which allowed customers who lacked credit to reserve items and pay for them in installments.

For a time, Kmart had a little bit of everything: You could shop for your kids’ back-to-school supplies, get your car tuned up and grab a meal without leaving the premises.

Kmart, which started out as Kresge’s in 1899, really started to fall apart in 2002 when it filed for Chapter 11 bankruptcy protection. After losing and selling off hundreds of stores, the company sealed its fate by purchasing Sears for $11 billion in 2004. Both Kmart and Sears would see almost all of their stores closed by the end of 2019.

Many of the shelves are already bare at the Kmart in Avenel, New Jersey.

Retail expert Mark Cohen thinks it didn’t have to end this way. He says the company was dogged by poor management decisions and could have stayed viable. https://t.co/BxXPAawm6e pic.twitter.com/Bgj5vBuFq4

“Kmart was part of America,” Michael Lisicky, an author who has written several books on U.S. retail history, told the AP. “Everybody went to Kmart, whether you liked it or not. They had everything. You had toys. You had sporting goods. You had candy. You had stationery. It was something for everybody. This was almost as much of a social visit as it was a shopping visit. You could spend hours here. And these just dotted the American landscape over the years.”

Former Kmart shoppers took to social media to mourn the passing of yet another store.

Just visited the Avenel Kmart that's closing... so many memories here of where I used to work 💜 pic.twitter.com/Ghyiu4YhZE

Sad.
😕
I amusingly remember 1960s era moms with we whiney kids in reluctant tow rushing from all corners of the store to get those legendary Kmart Blue Light Specials! 👍😅

Damn, as a teen and single mom #KMart was my go to spot. They let you put anything on layaway and had the best sales:-( My kids had great Christmas and Birthday presents thanks to KMART.

#Kmart Do you remember walking into a Kmart & Smell Popcorn & Seeing The Icee Machine. Sad That this store is almost done & Be no more pic.twitter.com/O8PcKzlb0d