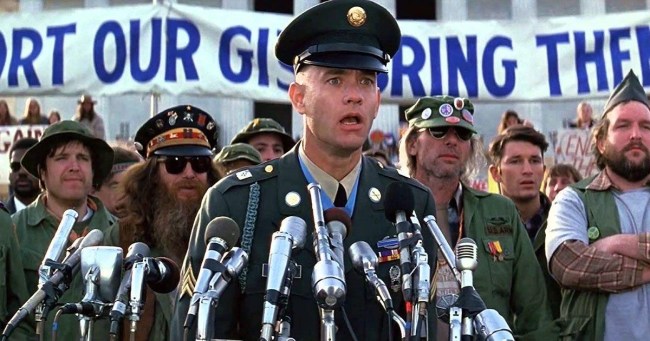 Like most people when it comes to the hobbies their passionate about, I love seeing how the sausage is made, you know? Real Inside Baseball stuff. Tell me about the time you and Robert Downey Jr did cocaine until 6 in the morning back in 1991. I want to hear about how George Lucas would punch Mark Hamill in the face while filming Star Wars (this one isn’t true, but IMAGINE?!). Share the story of how Forrest Gump’s famed no-speech-speech came to be.

In an appearance on the Pardon My Take podcast, longtime acclaimed screenwriter Eric Roth did exactly that, as touched on that iconic scene in Forrest Gump and how exactly it came to be, even revealing that he called in an assist to comedic greats such as Robin Williams and Billy Crystal.

“I think it’s a great movie story. So, I tried to write a really serious speech, right, about my feelings about the war and what it meant to a guy that fought in it,” Roth said.

“It didn’t quite work for the director (Robert Zemeckis) and he said: ‘You either have to write the greatest dramatic speech ever written, like a Shakespeare thing, or something really funny.’ And I said, ‘Okay, I’ll try it.’ So, I wrote the best I could dramatically and he didn’t dig it. And then I tried to write something funny — I’m not, by nature, a comedian — so I asked Billy Crystal to try — he tried it. Robin Williams tried it. I think John Lovitz tried it. Anyway, a bunch of comedians I knew quite well tried it and it didn’t work. So, what Bob [Zemeckis] did was have him step up to that microphone and do exactly what you see: somebody pulls the plugs so you can’t hear what he’s saying, because I never wrote the thing properly.”

Robin Williams, man — every time he pops up, my heart becomes filled with sadness all over again. In my lifetime, Williams’ passing has been the celebrity death to affect me most, by a mile. I will always miss him.