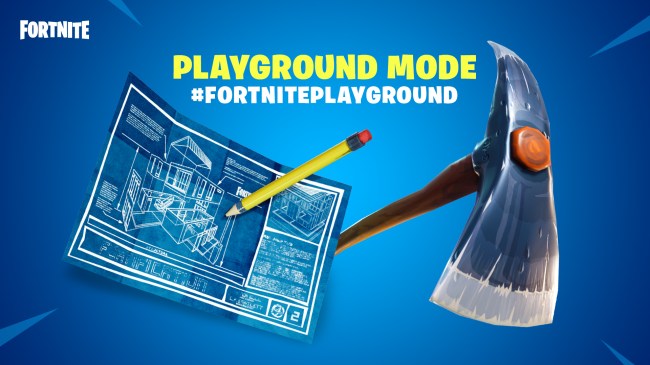 Do you suck at Fortnite? Be honest, do you have a .01 kill to death ration? Maybe you just need a little practice to hone your skills. FINALLY, Fortnite has a practice arena called “Playground Mode” where you can practice not sucking.

The v4.5 update hit Fortnite on Wednesday with the new Playground Mode and maybe you can start not getting killed by 7-year-olds. The practice mode puts you on a private version of the main island with up to four players. You’ll have one hour to put the work in so you don’t die in the first four minutes of actual gameplay. Or for experienced players, this gives you a chance to test out new strategies. But it’s not all about practicing how to merc your opponents, you can also practice how to do wicked cool cart jumps on tricked out ramps.

In the practice mode, you won’t even have to worry about the storm (at least for 55 minutes). There is no storms until the last five minutes of Playground Mode. The new mode differs than the regular Battle Royale because there is friendly fire, which means you can host a private battle with your crew. There’s also unlimited respawns (except deaths from the storm).

If you are someone who wants to improve your building abilities there is great news. In the Playground Mode, gathering is 10 times faster than in normal games, so there’s plenty of resources. There are even 100 llamas kindly delivering materials, traps, health, shields and other items. Expect to see epic buildings, cart tracks, and other enormous structures built in this mode.

This is all awesome news except that Playground Mode is a Limited Time Mode (LTM), which kind of sucks for people who truly want to get better at Battle Royale. Fortnite creative director Donald Mustard describes Playground Mode as “our first toe-dip into what will become (I hope) one of the coolest aspects of Fortnite.” Could a new mode come down the road where you’ll be able to set the number of combatants, invite friends only, maybe customize which kinds of weapons are available? Let’s hope so.

Another big addition in the v4.5 update is dual pistols. These combo guns inflict 41-43 damage and both weapons will use medium ammo and fire with one pull of the trigger, which means one flick of the finger can deal 86 damage. Happy Fortniting!