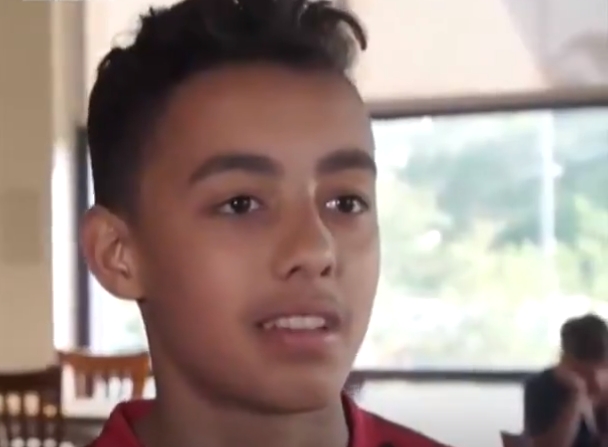 The first-ever Fortnite World Cup went down this weekend at the Arthur Ashe tennis stadium in Queens, New York. Epic Games put up a whopping $30 million in prize money for professional gamers from around the world to snatch the top prize of $3 million. One 15-year-old became a millionaire in one day after dominating nearly all of the competition. What were you doing at 15?

One of the biggest esports events ever happened on Saturday, the 2019 Fortnite World Cup finals for duos. In the 100-player battle royale, 15-year-old British gamer Jared Ashman and his 21-year-old Dutch teammate Dave Jong AKA Rojo finished second place in the finals of the duo competition. The two young men will split $2.25 million in Fortnite World Cup prize money.

Tune into BBC TV and radio today to hear more about the amazing surprise silver for 15 year old Brit @WolfiezGG and his Dutch teammate @Rojo11 – they’ve become millionaires at the #FortniteWorldCup – look at the 😃! pic.twitter.com/74qZYMB1jp

Jaden, who plays under the gamer tag of “Wolfiez,” admitted that it was a tough road to get to Fortnite fame, mostly because of his meddling mom getting in the way of his Battle Royale practice. His mom was initially very opposed to her son devoting so much time to the video game that she threw away his Xbox.

Jaden’s mother, Lisa Dallman, admits that she threw her son’s Xbox in the garbage because Fortnite was affecting his schoolwork. Hey mom, way to understand your son’s potential and his passions. Lisa said the arguing over Jaden’s gaming habit had become a “nightmare” and called playing the game a “waste of time.” Jaden was practicing Fortnite as much as eight hours a day.

Now, mom supports her son’s Fortnite career and was right by his side after he won over a million dollars. That’s convenient. Jaden would have the last laugh with the gaming feud with his mom and said: “Now I’ve proved to her that I can do stuff, I’m really happy.”

Ashman said he would save the prize money for school or a house. His mom said that Jaden will probably spend the million dollars on a “lifetime of Uber Eats.”

Just spoke to Jaden’s mum. It’s 9:30 here in NYC. She said: “Hi Joe, it's crazy. I can't sleep and Jaden can do nothing but sleep haha!” Brilliant. Not surprised he was knocked out – the speed these guys brains work at at this level of gaming is unreal. #FortniteWorldCup2019 https://t.co/Efh7efHYGt

The Fortnite World Cup duo winners were Emil Bergquist Pedersen AKA Nyhrox from Norway and his partner David W AKA Aqua from Austria, who took home the $3 million prize money.

Over 40 million gamers attempted to qualify for the 2019 Fortnite World Cup, but after 10 weeks of intense gaming only 100 finalists from 30 different countries made the cut. The solo champion will be crowned Sunday.