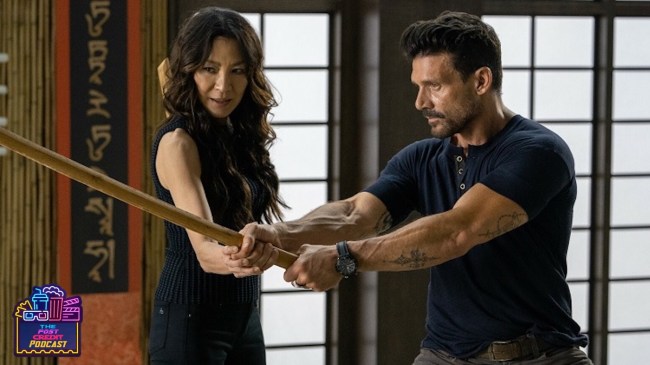 While Michelle Yeoh has been in the movie-making business for longer than I’ve been alive, the 60-year-old actress and action icon is finally getting the widespread plaudits she deserves thanks to a career-defining, and potentially Academy Award-nominated, turn in the hit film Everything Everywhere All At Once.

A few months prior to featuring in All At Once, Yeoh was starring alongside fellow action-genre stalwart Frank Grillo in Hulu’s awesome Boss Level. Given Grillo’s appreciation for both action movies and Yeoh’s career, we asked him if he had any memories of working with her that he’d like to share, and he instead revealed — in an insanely relatable fashion — that he actually had a crush on the Hong Kong film legend.

Speaking to BroBible’s Post-Credit Podcast ahead of the release of his new film Lamborghini: The Man Behind the Legend, Grillo detailed his experience working with Yeoh and how he made up an “affair” in his mind:

“I’m a crazy Michelle Yeoh fan. First of all, I was intimidated by her. And I had a crush on her,” Grillo told BroBible’s Post-Credit Podcast.

“And I think she knew it, so when we were working together, she was really kind of sweet and little bit smitten, too. And I had this whole thing with Michelle Yeoh — *in my mind* — and we had this kind of affair while we went sword fighting And it was spectacular. I couldn’t believe we got her to come and do the movie,” he said.

Grillo can next be seen starring as Ferruccio Lamborghini in the upcoming Lionsgate biopic Lamborghini: The Man Behind the Legend, which hits select theaters in the United States on Friday, November 18. You can check out the trailer for that below.

As for Yeoh, she’ll follow up her potentially Oscar-nominated turn in Everything Everywhere All At Once with a starring role in the Netflix film The School for Good and Evil and the Netflix series The Witcher: Blood Origin.