Vince Vaughn Is Just Perfect In The Trailer For ‘Freaky’, A Hilarious Horror Movie Version Of ‘Freaky Friday’ 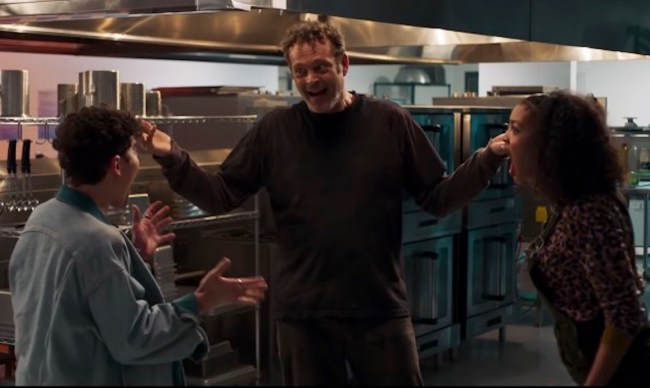 If you’re around the same age as me, then Vince Vaughn is just one of those actors — you know, barring him being canceled or whatever, which thankfully hasn’t happened — who will forever and always be your BOY. You see him pop up in something and you think to yourself, “Vince Vaugh, man — love that guy.” Like an old friend from high school who you don’t connect with often, but when you do, it’s just like old times.

And while Vaughn’s career has certainly wained in recent years — to be fair, the brand of comedy that made him a star has also gone extinct — he’s still churning out solid movies like Hacksaw Ridge, Brawl in Cell Block 99, and Fighting with My Family. But more so than any of these movies, Vaughn’s latest joint — Blumhouse and Universal’s Freaky — looks like the perfect setting for his comedic talents.

The key in all of this is that Freaky is a Blumhouse movie, which is a studio that essentially doesn’t miss when it comes to their horror flicks, as they’ve produced some of the last decade’s best, such as Paranormal Activity, Insidious, Sinister, The Purge, Oculus, The Gift, Split, Get Out, Happy Death Day, Halloween, and The Invisible Man.

Here’s the official synopsis for Freak, via Universal:

Seventeen-year-old Millie Kessler (Kathryn Newton, Blockers, HBO’s Big Little Lies) is just trying to survive the bloodthirsty halls of Blissfield High and the cruelty of the popular crowd. But when she becomes the newest target of The Butcher (Vince Vaughn), her town’s infamous serial killer, her senior year becomes the least of her worries.

When The Butcher’s mystical ancient dagger causes him and Millie to wake up in each other’s bodies, Millie learns that she has just 24 hours to get her body back before the switch becomes permanent and she’s trapped in the form of a middle-aged maniac forever. The only problem is she now looks like a towering psychopath who’s the target of a city-wide manhunt while The Butcher looks like her and has brought his appetite for carnage to Homecoming.

With some help from her friends—ultra-woke Nyla (Celeste O’Connor, Ghostbusters: Afterlife), ultra-fabulous Joshua (Misha Osherovich, The Goldfinch) and her crush Booker (Uriah Shelton, Enter the Warriors Gate)—Millie races against the clock to reverse the curse while The Butcher discovers that having a female teen body is the perfect cover for a little Homecoming killing spree.

At this time, Freaky is set to hit theaters in the United States on Friday, November 13.