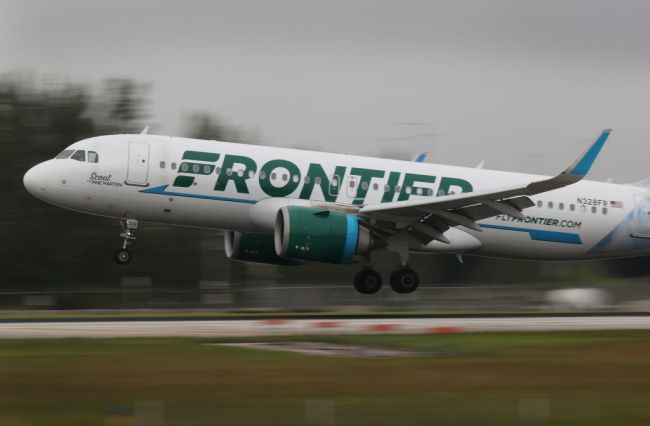 Frontier Airlines is facing backlash on the Internet for suspending flight attendants who were filmed duct-taping an out-of-control passenger.

Frontier passenger allegedly touched 2 flight attendants breasts, then screamed his parents are worth $2 million, before punching a flight attendant. Frontier suspended the crew for duct taping the passenger to his seat as they landed in Miami. 22 yr old Max Berry is in custody. pic.twitter.com/4xS9Rwvafx

The police report said he had two drinks while on the flight and ordered another drink.

The report said he brushed an empty cup against the backside of a flight attendant.

He then spilled his new drink on his shirt, went to the bathroom and came out shirtless, the report said. A flight attendant helped him get another shirt from his carry-on.

After walking around for 15 minutes, the report said, the man then groped the chests of female flight attendants.

Police said he then punched a male flight attendant in the face who had been called over to watch him.

Frontier Airlines released a statement in which they revealed the flight attendants seen in the video were “relieved of flying pending an investigation.”

“During a flight from Philadelphia to Miami on July 31, a passenger made inappropriate physical contact with a flight attendant and subsequently physically assaulted another flight attendant. As a result, the passenger needed to be restrained until the flight landed in Miami and law enforcement arrived. The flight attendants will be, as required in such circumstances, relieved of flying pending completion of investigation of the events.”

People were not happy the flight attendants were suspended considering they felt duct-taping the man was justified due to his behavior on the flight.

Wait wait hold up, they suspended the CREW after this? @FlyFrontier that's just wrong man. Duct tape was more civilised than I would have been. https://t.co/BSbmvk0tQG

the union will make this right.

still, shame on @FlyFrontier for not using this incident to deter bad behavior by praising the crew for their actions to keep passengers and fellow crew members safe. https://t.co/OlGRc587pC

I'm confused by this suspension. If a passenger gets violent on a flight, obviously the crew must do something to restrain him in a hurry. How many mechanisms does a flight crew have to restrain a violent passenger? It may *look* crazy, but this seems to be one reasonable method. https://t.co/RdlfyILnyv

The crew acted to ensure the safety of the flight, the crew, and the other passengers. Suspending them makes no sense. They should get a bonus for safely landing the flight!

Flight crews should not have to face this abuse in their jobs – I hope #frontierairlines give them the raise they deserve https://t.co/H1KsrLcAOT

Seeing this hero attendant tape this clown's face is very satisfying. Unsuspend them and give them bonuses. https://t.co/udQ0rqklhd

suspended the crew? @FlyFrontier, your employees are supposed to accept sexual harassment and being physically assaulted? https://t.co/kyIrXPvnnM