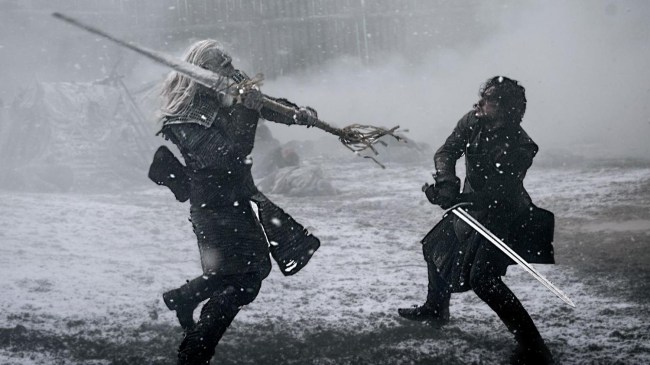 We know that an epic battle is coming to Westeros and we know that it will be a world-changing conflict between ice and fire as seen in the teaser trailer for Season 8 of Game of Thrones. But it sounds like the upcoming tremendous clash will go down way before you thought it would.

Game of Thrones fanboys speculated that the massive battle would either happen in the final episode of the final season or more likely in the penultimate of Season 8. Some of GoT‘s most important and largest battles took place in the penultimate episode such as the Battle of the Bastards and Beyond the Wall. However, according to the Night King, it will go down way before that.

Vladimir Furdik, who plays the Night King, slipped and let the direwolf out of the bag as to the exact timing of the big battle that is coming. A Hungarian publication reported that Furdik revealed that the major battle will happen exactly at the halfway point of the final season that sadly only has six episodes.

“In the third episode of the last season, there is a battle that the creators intended to be a historic moment in television,” the Slovakian actor who plays the Night King said while appearing at a fan convention in Hungary. “Almost the full episode will be about the battle, it will take about one hour.”

There will be so much collateral damage between Daenerys’ Dothraki armies, Lannister armies, Jon Snow’s warriors from the North, and the Night King’s Army of Dead. This gives three episodes of at least one hour in length to tie up any loose ends, ravage through the war-torn Westeros, and decide who will finally sit on the Iron Throne.

The upcoming battle scene in Season 8 took 55 straight nights to film last April because it is so cinematic and encompassing. For comparison, Battle of the Bastards took 25 days to shoot.

The note that the #GameofThrones producers gave to the cast and crew after filming for 55 straight nights pic.twitter.com/fEYJZo5eMi