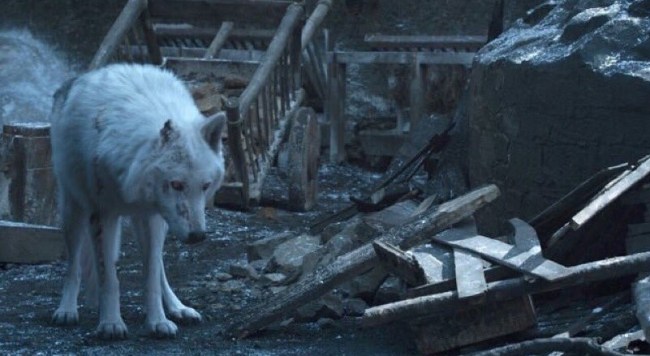 Jon Snow’s direwolf Ghost is one of the most beloved characters in ‘Game of Thrones’ which is why fans were outraged when Jon Snow gave him away to Tormund and didn’t pet him while saying goodbye during last week’s episode.

Jon Snow was a hero and maybe even deserving of the Iron Throne but when he sent Ghost away without even giving him a pet goodbye he fell to Walder Frey levels of villainy. How you gonna do Ghost like that Jon?!

Me: Jon is the most purely good and worthy character on the show and I would like to see him sit the-

#GameofThrones
Like if you would pet Ghost, the goodest boy in all the seven kingdoms. pic.twitter.com/EDw1m2Qcc8

me: Jon Snow must sit on The Iron Throne because he’s the most thoughtful and caring person in the Seven Kingdoms
[Jon doesn’t pet Ghost when he gives him away]
me: Jon is no better than Cersei

Jon didn’t even give Ghost a final pet??? GAME OF THRONES WYD

Director David Nutter says CGI prevented Jon Snow from giving Ghost a proper goodbye — ‘Since the direwolves are kind of CG creations, we felt it best to keep it as simple as possible … It played out much more powerfully that way.’

Since the direwolves are kind of CG creations, we felt it best to keep it as simple as possible,” said Nutter. “And I think that it played out much more powerfully that way.”

“Game of Thrones” visual effects supervisor Joe Bauer previously explained the difficulties of bringing the direwolves to life ahead of Season 8, saying real wolves need to be filmed and scaled up. And unfortunately, those wolves “only behave in certain ways.”

“Keeping Ghost off to the side, I thought that played out better,” said Nutter, adding that it gave Jon a chance to be with Tormund and Gilly before having one last moment with his wolf.

Many felt Nutter’s excuse was lame considering Jon SNow has been CGI riding dragons this season.

So he can ride a whole CGI ass dragon but a simple pet on Ghost neck is an issue. Bet. https://t.co/GsdYagQIqb

#GameofThrones
Jon: can I pet Ghost?

“We couldn’t have Jon pet Ghost cuz we blew our CGI budget on the blood spraying out of Rheagal’s throat. And Starbucks.”

I keep pretending like I understand why Ghost’s CGI is expensive but I honestly don’t get it.. am I seeing things or aren’t there full blown dragons on this show?? They’re making it sound like Ghost is the single most expensive thing that ever happened to GOT