Gang Leader Nearly Escaped Prison By Dressing As His Teen Daughter, Planned To Leave Her In Jail 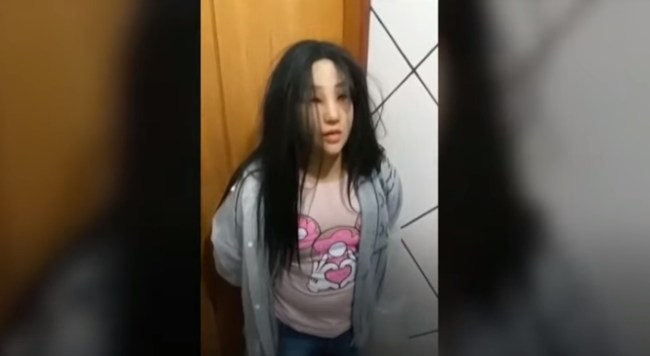 If you think you have trust issues with your parents, you’ll probably never have your parents break your heart in the way that this gang leader took advantage of his daughter in a failed effort to escape prison and was ready to ditch his own offspring at the jail. This poor girl is going to have daddy issues for a long time.

We take you to the Gericinó Prison Complex in the western part of Rio de Janeiro in Brazil. That is where one inmate attempted a unique and bold jailbreak attempt.

Clauvino da Silva, a Brazilian gang leader known as “Shorty,” had his 19-year-old daughter visit him at the prison on Saturday. The gang leader did the ole switcharoo with his daughter kind of like 80s movies such as Vice Versa, Big and 18 Again.

Da Silva put on a rubber face mask, a long black hair wig, glasses, tight jeans and a pink shirt with cartoon donuts and cutesy hearts. Da Silva even went so far as to put on a black bra. What dedication to becoming a 19-year-old girl. “A” for effort!

Clauvino getting ready to break out of prison.

Unfortunately for Clauvino, the gang leader did not swing his hips and sashay properly because he was caught by prison guards. He was stopped by prison guards as he(?) attempted to walk out of the penitentiary’s main door. Guards were tipped off when they noticed the “young lady” was acting “too nervously.”

This is some El Chapo sh*t, except El Chapo was successfully able to break out of prison multiple times.

Thankfully, the correction officers have a sense of humor and not only forced da Silva to disrobe from his wild disguise on camera, but also shared the video with the rest of the world so we could all enjoy this amazing moment.

A Brazilian gang leader tried to escape from prison by dressing up as his daughter when she visited him behind bars and walking out the penitentiary’s main door in her place. He was stopped walking out for looking suspicious. pic.twitter.com/OS9vlp6xWI

I remember my first trip to Bangkok. Authorities may charge the daughter because of her possible role as an accomplice despite that her dear ole dad was ready to leave her behind in prison.

Be honest, on the right (or wrong) night, you’d swipe right.

Da Silva was a leader in the Red Command, one of the most powerful criminal groups in Brazil that operate a massive drug trafficking organization in Rio de Janeiro. Clauvino will now be transferred to a special unit of a maximum-security prison and will face disciplinary actions according to prison officials.

Police after they caught this manly “young lady.”