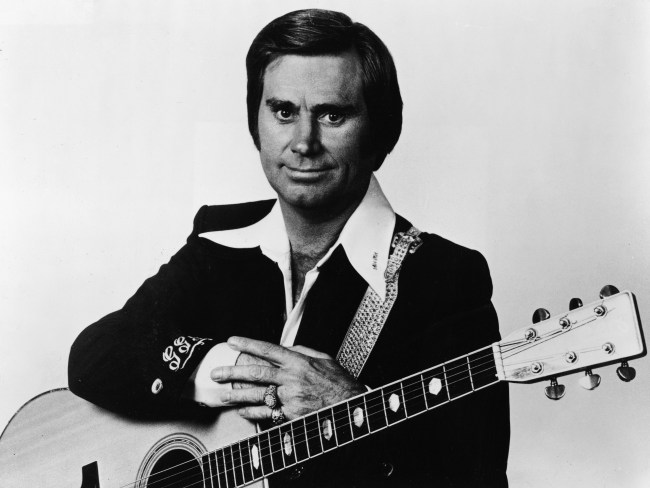 George Jones began his career in the early 1950s and skyrocketed to country music success with his first No. 1 hit “White Lightening” nine years later. He followed it up with six decades of hits throughout an up-and-down career. Possum, as he is known, won many awards but also battled alcoholism and arrests throughout his life. There is one thing for certain, however. He cared about his craft and helped make country music what it is today.

Jones was known for his hits such as “He Stopped Loving Her Today” and “The Grand Tour,” but also was well known for being a savage.

Tracy Lawrence joined the Justin Moore Podcast and talked about his experience touring with Jones. In the early 1990s, Lawrence was out on the road and they would routinely do a meet and greet before the concert. He learned quickly to stay away from Jones while walking to the events.

“I learned real quick not to get to close to him because George, if you were walking beside him, especially if you were on right his side, you would be walking along everything fine having a conversation, and he would just take his hand and he would backhand you right down the cod.” Lawrence said. “He would say ‘take a bow son.’ I mean, it doubled you over right there in hall, man. And he’d just laugh. So you learned to kind of guard yourself when you was close to him because he’d catch you off guard and pop you boy.”

On a later episode of the Justin Moore Podcast, LOCASH told a story that Jones once told him a tale about the time he was touring with Buck Owens. As his own music started to gain traction, he felt that it was his time to be the headliner. He would walk over to Owens’ trailer every night and tell him that it was his turn to headline, to which Owens always said no. One night, George had enough of the rejection.

“George goes back to his bus and learns all of Bucks songs, and then he went out and played the entire Buck Owens set, top to bottom,” LOCASH said.

Apparently it wasn’t the only instance either.

“That there was the last show I ever did with Buck Owens…,” Jones said, in some form. “Same thing happened with Elvis Presley; I never did a show after that either.”

To put it into context, that would be the equivalent of Taylor Swift walking up to Reba McIntyre in the early 2000s and asking to headline a show. Once McIntyre said no, Swift would have learned her entire set and played it from start to finish on stage that night.

The story begins around the 55-minute mark.