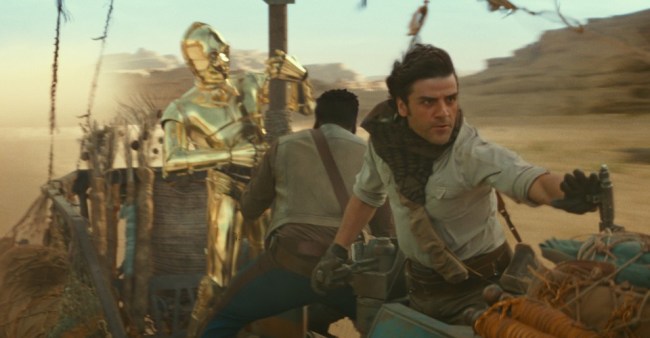 As I was speaking to co-worker Chris this morning, he mentioned how much his son has been loving The Mandalorian, which prompted me to remark how lucky he is, as I “didn’t have any Star Wars” growing up, which is simultaneously a truth and a lie.

I was born in the year 1993, so by the time I was six-years-old (which is really sort of on the cusp of *prime* Star Wars age) there was, in fact, a Star Wars movie: it was called The Phantom Menace and I remember quite well. What I don’t remember, though, is falling in love with the franchise the way the previous generation did and that’s largely because The Phantom Menace — save for its final and admittedly epic “Duel of the Fates” scene” — blows, especially if you were a kid. Ah, yes, heavy on the taxation jargon and Trade Federation politics and light on the X-Wings and lightsabers, just what every Star Wars fan wants to see. The shortcomings of the prequel trilogy are well-worn so there’s no need to rehash them here (although that said, I do tend to enjoy Revenge of the Sith more than most). I have my opinions of them and so do you. You know who else had an opinion of them? Disney.

Famously purchasing Lucasfilm for $4 billion back in 2012, the Mouse House hopped right back into the Star Wars business, as they released a new film every single year from 2015 to 2019. And they largely did so without the help of Lucas, who recently admitted he thought he’d be more involved in the development of the sequels.

“At that time, I was starting the next trilogy; I talked to the actors and I was starting to gear up,” George Lucas told author Paul Duncan when asked about why he sold Lucasfilm to Disney. “I was also about to have a daughter with my wife. It takes 10 years to make a trilogy — Episodes I to III took from 1995 to 2005. I’d still be working on Episode IX. In 2012, I was 69. So the question was, ‘Am I going to keep doing this for the rest of my life? Do I want to go through this again?’ Finally, I decided I’d rather raise my daughter and enjoy life for a while.”

“I’ve spent my life creating ‘Star Wars’ — 40 years — and giving it up was very, very painful. But it was the right thing to do,” Lucas added. “I thought I was going to have a little bit more to say about the next three because I’d already started them, but they decided they wanted to do something else. Things don’t always work out the way you want. Life is like that.” [via IndieWire]

If it makes Lucas feel any better, the sequel trilogy is, if anything, only mildly more well-received than the prequels. Either way you spin it, neither of the parties involved have been able to recapture the magic of the original trilogy. Except for perhaps Rogue One, which is low-key the best Star Wars movie of all-time. Y’all ain’t ready for that take though.