This Gargantuan 13-Foot-Long, 700-Pound Alligator Was So Massive People Thought It Was A Hoax 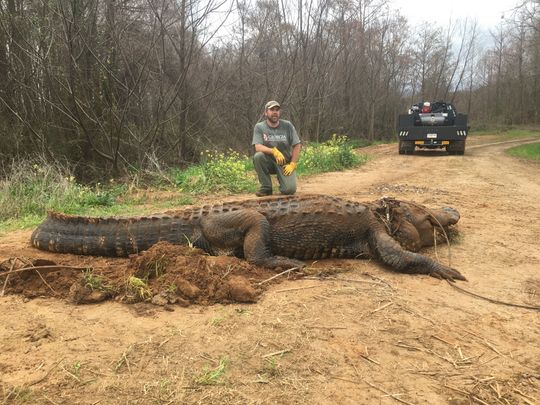 An alligator was found in Georgia this week that it was so gigantic that people thought it was fake. The gator was so enormous that people assumed it was a hoax and authorities in the area had to issue an official statement that said gargantuan alligator was legitimately massive.

Brent Howze, a wildlife biologist, encountered an extremely massive alligator in an irrigation ditch near a lake in Georgia last Monday. The swamp beast measured 13-feet and 4-inches long and weighed in at an estimated 700 pounds. Better him than me.

The absolute unit of an alligator had survived several old gunshot wounds, but was not doing too well when Georgia wildlife officials found it. The giant gator was euthanized due to its poor health according to the Georgia Department of Natural Resources.

Howze said it was no big deal getting close to a literal dinosaur. “You’re perfectly safe. These animals exist. They’ve been here for centuries, they’ve been existing with people for centuries and they’re gonna continue to.”

The gator is huge, but it did not set the record for the biggest alligator in the state of Georgia. That record occurred in 2015, when a 14-feet-1-inch gator was found. Male alligators can grow as long as 16 feet.

“It’s a testament to Georgia’s alligator-management program that alligators can grow to this size,” said Melissa Cummings, a spokeswoman for the Georgia DNR. “The only way these animals get this large is by avoiding humans.”

The Georgia Department of Natural Resources posted a photo of the prodigious creature online, but everyone on social media, including local media, thought the huge gator was fake. The department had to ensure folks that the gator was not a hoax and that the animal was real and spectacular.

“Apparently a lot of people think it’s fake, but I can assure you that it is not,” Howze said. “I’m the one in the picture, and you can probably tell that I didn’t get too close to it.”

It should be noted that there is definitely some forced perspective going on here. It appears that the man has his knee on the back of the gator, but if you look closer you’ll notice that the gentleman is several feet farther back than the alligator giving the optical illusion that they are the same distance away, making the gator look larger. Still, this is a f*cking gigantic gator.