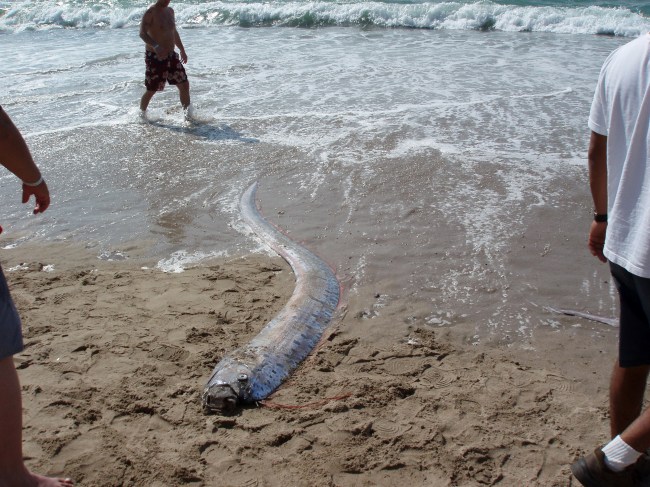 The Giant Oarfish is one of the coolest species found anywhere in the ocean. There have been unconfirmed reports of these fish being found measuring over fifty feet long and they look like a cross between eels and sea dragons, whatever that might be.

This 13-foot sea monster was found in Baja’s Pichilingue Bay in La Paz. It was found by aquaculture engineer Fernando Cavalin and a friend and a clip of the fish has gone viral. It’s easy to see why this would garner so much attention, they look like actual dragons. The Giant Oarfish pictured above is actually one from 2006 that was photographed in Mexico.

Look at this thing and tell me it wouldn’t look perfectly at home in a Science-Fiction film:

The estimated 13-foot Giant Oarfish washed up on a beach in Mexico and it has some people unsettled because the fish has a reputation as being the ‘earthquake fish’.

Prior to Japan’s catastrophic 2011 earthquake, there was an ‘unusual number of’ slender oarfish which appeared off Japan from December 2009 to March 2010 and many of these fish washed up on the beaches. This fueled the myth that these are ‘earthquake fish’ that show up before large earthquakes. There’s no scientific evidence that these Giant Oarfish have any connection to earthquakes but that hasn’t stopped the myth from carrying on.

Fernando Cavalin told local media the Giant Oarfish was dead when they found it and the long body was already falling apart, he said it was “dead and in an early state of decomposition”.

Here’s one that was found on Catalina Island back in 2013:

These are deep water fish. They like to stick between 660 to 3,300-feet deep which means they are rarely seen alive by anyone on the ocean surface. There are no strong currents down that deep which means these massive fish don’t really build up muscle like other species and when they come up to the shallows they’re unable to navigate in swift-moving water. They are found across the world in deep oceans.