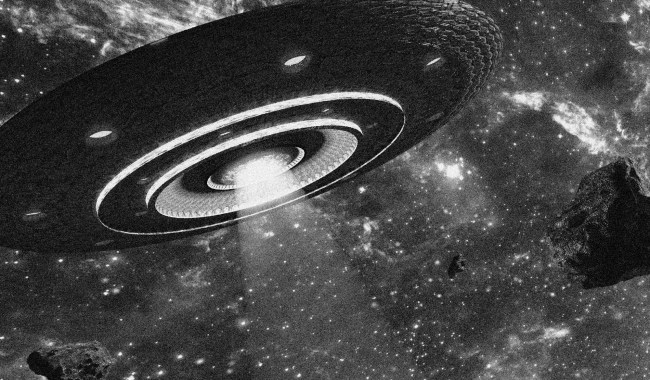 As if we needed more proof that UFOs and aliens exist, we just got it recently when a “glowing object” was caught on a NASA live stream of the International Space Station (ISS).

The UFO was spotted on January 5, 2020 by UFO and alien expert Scott Waring, who wrote about the experience on his website.

“I was watching the live cam and noticed the huge glowing object that matched speed with the space station,” Waring wrote. “It was visible on NASA live cam for 15 minutes. If it was the moon, it would only be visible for a minute and half at most. I’ve seen the moon a hundred times on the cam…this is not it.

“I made the video 2x speed to make it faster and not waste your time, but it was 15 min long. The UFO moves from bottom to top but instead of moving in a straight line, it suddenly curves and moves to the upper left. At this point the object begins to move away from the space station at incredible speed…I know this because the object becomes smaller, which means its moving off into the distance.

“Why wont NASA ever talk about these UFOs? Because they are real.”

(I know it looks like there’s no video below, but trust me, if you click on it, it’s there.)

Waring also recently posted other videos taken from the ISS which appear to show the presence of UFOs.

I don’t know about you, but to me the evidence here is pretty overwhelming. Sooner or later the powers that be will admit what we all already believe.

Previously…
• Newly declassified CIA intelligence report reveals new info about 1973 UFO sighting at ‘Site 7’ in Russia
• Navy admits it has additional ‘top secret’ footage of USS Nimitz UFO encounter but won’t release it
• UFO sighting? Mysterious object leaving a fiery trail in the sky spotted by multiple people in Florida
• Navy pilot who filmed USS Nimitz UFO encounter breaks his silence after 15 years – Tic Tac craft broke laws of physics
• UFO that ‘nearly hits’ a SpaceX satellite during live stream is ‘100% proof aliens are watching,’ says expert
• Top researchers claim U.S. military is covering up their own super advanced aircraft by making people believe it is a UFO
• Mysterious hovering orbs over Mesa have many believing they spotted a glowing UFO
• UFO seen by 100+ people hovering in the California sky for five minutes sparks alien concerns
• A stationary UFO recorded in the South Carolina sky sparks secret government surveillance theory
• Former head of MI6, who’s allegedly part of a secret global conspiracy on UFOs, says he believes aliens do exist
• UFO expert claims ISS video is ‘100% proof’ NASA, Russia know aliens visit the space station
• Bug expert declares there are insects on Mars and then suddenly deletes research after backlash
• UFO expert claims to have video proof of a fleet of alien spaceships passing by our moon
• 5 Navy veterans and new anonymous source who witnessed the USS Nimitz UFO incident come forward to reveal what they saw
• Retired Air Force Major says a space alien was shot and killed at a base in 1978, government covered it up
• US Navy pilot David Fravor who claims to have witnessed a UFO says the tapes of the encounter have disappeared
• Eyewitnesses spot identical fleet of UFOs in the sky over Utah and North Carolina in the same day
• UFO expert says he has ‘100% proof’ that aliens currently live in a ‘city’ on our moon
• Red triangular craft recorded hovering in the Texas sky is perhaps the ‘clearest UFO footage’ ever
• Top Gun Navy pilot describes his incredible UFO encounter on ‘The Joe Rogan Experience’
• A strange ‘fleet’ of 14 glowing UFOs was spotted and caught on camera off the coast of North Carolina