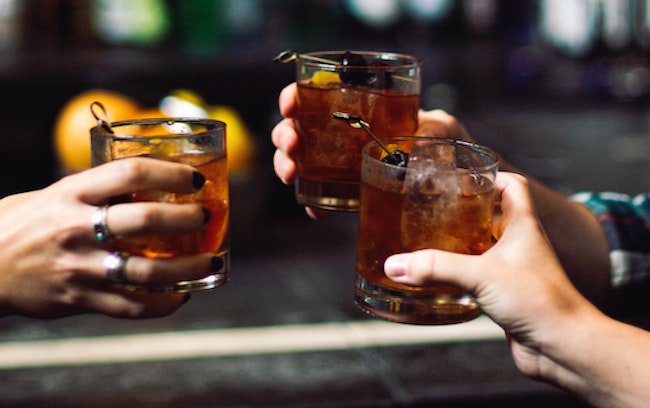 Earlier this month, a survey revealed more than half of Americans were planning on traveling for Thanksgiving this year despite the CDC recommending otherwise, and while the majority of those saying they were making a trek would be taking a road trip, that didn’t stop millions of Americans from heading to airports to hop on a flight over the course of the busiest weekend the TSA has experienced since the onset of the pandemic back in March.

There’s no way to know how many people are heading back to the place they grew up in to celebrate the holiday with their family, but you can be pretty damn sure that many of those who do so will find themselves sitting in their parents’ house on Wednesday looking for a way to get out of conversations concerning the hottest rumors circling the town and containing at least one story that begins with “You won’t believe who called!”

Historically speaking, the best way to escape has been to head to a local watering hole for an evening some people have dubbed “Drinksgiving” or “Blackout Wednesday,” which has traditionally been the busiest night of the years for bars around the United States…and easily the most overrated.

On Monday, Pennsylvania Governor Tom Wolf announced a ban on on-site alcohol sales at bars and restaurants beginning at 5 P.M. on Wednesday and ending on Thanksgiving morning in an attempt to deter large gatherings as the state continues to be one of the many to try to flatten the curve after seeing a spike in cases in recent months.

Now, before I continue, I want to acknowledge the negative impact this will have on the businesses who will be affected by the decision, as many of them have gotten absolutely screwed over the course of 2020 and the fact that they’ll miss out on the revenue they’d usually generate on such a big night is just another insult to the many injuries they’ve been subjected to due to the various restrictions that have been put in place.

However, as far as drinkers are concerned, this is a blessing in disguise, because if you’ve willingly and routinely subjected yourself to patronizing one of those establishments on Thanksgiving Eve over the years, you’ve been doing everything wrong.

I know this because I used to be one of those people. It started back in college when I was first faced with the decision to either head to a bar or anxiously wait until my parents announced they were going to bed before breaking out the bottle of whiskey I’d picked up and hidden in the garage so I didn’t have to deal with them silently judging me while I consumed way too much of it in front of them.

At this point, I should probably admit that I’m one of those people who basically never talked to anyone I went to high school with as soon as I was handed my diploma. It’s not that I didn’t have friends, but there was really no one I was tight enough with to keep in touch with when I finally got the chance to escape the small town in Connecticut I couldn’t wait to get the hell out of.

However, when faced with the two aforementioned options, getting the hell out of my house was obviously the most preferable of the two. However, in doing so, I put myself in the position to have to deal with a different kind of judgment and conversations I couldn’t really give less of a shit about—a reality that took me far too long to realize was the case.

While going out the night before Thanksgiving might seem like a good idea, the downside is that basically every person you used to know who’s also back in town will do the exact same thing. If you’re in your early 20s and still keep in touch with some of your old buddies, you might be able to have a good time while catching up, but you’re also setting yourself up to have to deal with at least one of two all but inevitable interactions that most people would prefer to avoid.

The first involves chilling with a drink in your hand while casually looking around only to make eye contact with someone from your past—whether it’s an old crush or a former best friend you drifted away from—which has two potential outcomes: you either decide to act like it never happened or have a chat at least one of you feels obligated to have even though neither of you probably want to.

However, that’s nowhere as close to as terrifying as simply minding your own business only for someone to tap your on the shoulder or come out of nowhere to greet you with a far too enthusiastic “Hiiiiiiiiiii!” and all but forcing you to engage with them.

These impromptu and unsolicited reunions will then lead to the standard small talk that gets more unbearable with every year that passes. If you’re still in college, it’s usually not that bad, as once you talk about what you’re majoring in, what you’re planning to do after you graduate, and act like you’ve “heard of” the friend of the person you’re talking to who goes to the same school even though you’re totally unaware of their existence, things come to a fairly natural end.

However, once you transition into a Real Adult, these exchanges tend to evolve into a subtle dick-measuring contest that can make the night a bit of an emotional roller coaster. One minute, you’re slightly too happy to learn that the valedictorian who went to a respected liberal arts school is currently living with their parents because they picked a major that left them without any real job prospects, and the next, you discover that the guy who once got suspended after showing up drunk to a first-period gym class and still resides in the town he’s never left now operates a successful landscaping business there that allowed him to buy his own house before turning 25.

Even if you don’t live in Pennsylvania, common sense dictates you should avoid going out on Wednesday this year due to our current reality. However, even if the planet didn’t currently have a pandemic on its hands, you’d still be doing yourself a disservice by doing so, and while there’s no telling what the world will look like once we return to some sense of normalcy, I can only hope this particular tradition gets left behind.