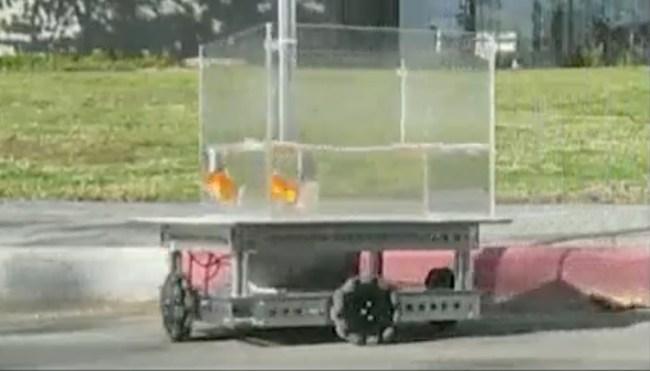 I assume anyone who regularly watched MythBusters back in the day is familiar with the experiment the show’s team conducted to test the longstanding, well, myth that goldfish have a three-second memory span.

When everything was said and done, the myth in question was indeed busted, which meant that anyone who relied on that misconception in order to tell themselves there was nothing bad about confining an animal to a tiny bowl for the entirety of its existence was in for a bit of a reckoning.

Now, we have even more evidence that suggests we might be underestimating the mental abilities of goldfish based on a study that was conducted by researchers at Ben-Gurion University in Israel.

According to The Verge, a group of behavioral scientists seemingly used the phrase “a fish out of water” as the basis for an experiment that involved constructing a “fish operated vehicle” (a tank of water perched on a motorized platform) that the aquatic subjects were able to operate with the help of a camera that allowed the FOV to move in the direction they swam.

I am excited to share a new study led by Shachar Givon & @MatanSamina w/ Ohad Ben Shahar: Goldfish can learn to navigate a small robotic vehicle on land. We trained goldfish to drive a wheeled platform that reacts to the fish’s movement (https://t.co/ZR59Hu9sib). pic.twitter.com/J5BkuGlZ34

In order to test the fishs’ ability to navigate and learn from their mistakes, the team placed them in a room with a target painted on the wall and rewarded them with a pellet every time they were able to reach their destination. They eventually introduced various obstacles to make the task more difficult and found the goldfish didn’t have much trouble adjusting or recalculating a new route.

These results demonstrate that the goldfish was able to transfer to a wholly different terrestrial environment and navigate successfully.

Thankfully, the goldfish still lack the ability to construct the vehicles that could theoretically be used to exact their revenge against humanity for centuries of enslavement, so at least we’ve got that going for us.