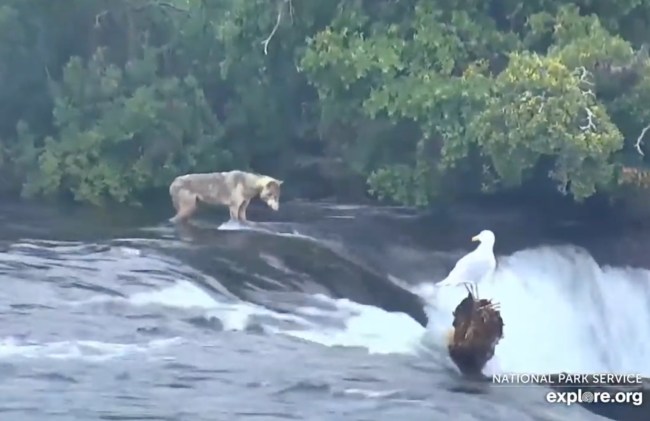 The Live Bear Camera at Brooks Falls in Alaska’s Katmai National Park is a staple of each Summer. This waterfall is uniquely formed and situated to attract a ton of salmon (the largest sockeye salmon run on the planet) as they swim upstream and in turn it draws in A LOT of Alaskan bears looking to cash in on an easy meal.

There are several Explore.org live cameras situated throughout Brooks Falls that give us an around-the-clock live view of what’s going down and recently a wild Gray Wolf showed up and started sniping some salmon.

Mike Fitz is the ‘resident naturalist’ for Explore.org and he told Mashable that these bears and wolves ‘compete for many of the same resources’ but never until now have they observed a wolf staying put on the falls and feeding for so long. The Gray Wolf was observed eating at least 30 fish and sockeye salmon can provide a quick 4,500-calorie meal per fish according to Mashable.

The live feed of Brooks Falls at Katmai National Park has been showing the wolf during downtime but there are a few clips floating around on YouTube already of the wolf. Some of these clips are short, some are long. I suggest watching them at 2x speed on YouTube so you can get through the footage quicker if you’re into it. Check out this apex predator in action:

Here’s the wolf running away with a fish:

Lastly, I wouldn’t be doing my job right if I didn’t share the live camera with you guys. At any given time, this real-time footage of Brooks Falls at Katmai National Park shows a handful of bears feeding on the sockeye salmon.

It’s wild to me how similarly the wolf feeds to the bears. Perched up above the falls waiting for a tired salmon to basically land in his lap and then run away for an easy meal away from the others. Or nab one down below and scamper away from the pack to eat in peace. They really are sharing the same resources here.

The YouTube comments on the live camera are ALIVE with people discussing the Gray Wolf appearance if you want to hop in there and discuss it with some like-minded wolf seekers.