Nothing To See Here, Just A Few Great White Sharks Tearing Apart A Dolphin Right Off The Beach 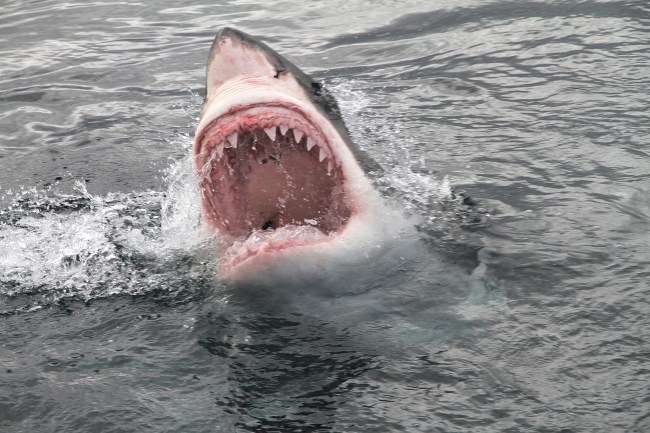 You can go ahead and file this under ‘things you don’t see every day’ because it’s not often that you see crisp 4K drone footage of a Great White Shark feeding frenzy.

The nature of this footage is a bit grim. The sharks are massacring a dead dolphin off Padaro Lane in Santa Barbara, California. It’s unclear how the dolphin died or how long it was dead for but what we can see is AT LEAST four great white sharks in the area showing up for an easy meal.

If you have a weak stomach for nature and aren’t up to the task of watching the greatest predators in the ocean shred a dolphin then you might want to bounce out of here right now because this footage might not be your cup of tea.

For anyone else out there who appreciates the raw realities of nature and are curious what a literal feeding frenzy of Great White Sharks looks like then you can hit that play button on this video below and check out this stunning drone footage. In fact, this is some of the best Great White Shark aerial footage I’ve ever seen filmed so props to The Malibu Artist for this amazing clip:

A comment underneath the video sheds some light on what’s happening:

Epic Documentation of white sharks (C.Carcharodon 10’ft and 14′ apprx) feeding on a dolphin (looks like a Tursiops)! Spectacular view, both sharks are tagged with ultra sonic acoustic transmitters, likely Long Beach (Shark Lab) or possibly Stanford (Monterey Bay).
The boats are too close and the drone too far away at times ( had to say that lol ) but everybody did really good and the sharks did their thing with no complications.
Really neat and first-rate drone flying and really good luck in scoring that experience! Some of the coolest footage from 2020 so far! Researchers will be stoked too.

According to Santa Barbara’s edhat.com, this was filmed around 3pm this past Sunday. One of the comments estimates the boat we can see is somewhere in the realm of 28-feet-long which would put one of those Great White Sharks we see at around 15-feet.

This is a particularly busy time of year for Great White Sharks of all sizes up and down the California coast and on into Baja. We are treated to some stunning shark footage this time of year but I’m willing to go out on a limb here and say it’ll be hard to top this Santa Barbara footage given the number of sharks in this video and just how quality the footage is.