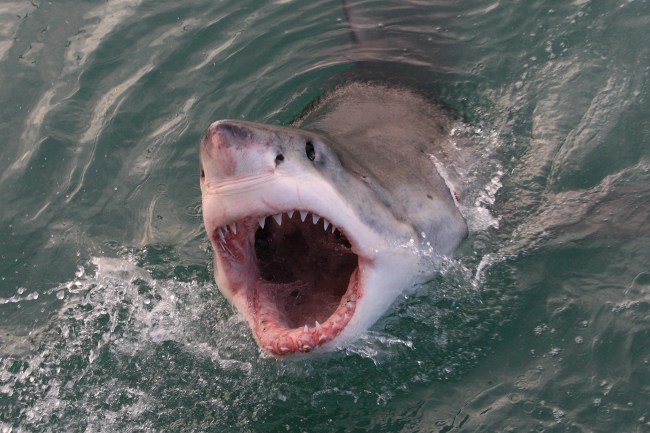 During the Summer months in the United States, Cape Cod might be home to more great white sharks than any other place on the planet. These apex predators show up in Cape Cod in huge numbers each year and have been seen more frequently over the past few years which suggests those numbers are growing.

Over the weekend, this family captured some of the craziest fishing footage imaginable. A dad was fishing with his sons aboard a sportfisher (boat) and the camera was rolling as someone was bringing in a small fish (bait?) on one of the rods.

Just as the fish was about to come over the stern a great white shark burst out of the water, nailed the fish, and managed to splash everyone on the boat like a Shamu show at Sea World. Capt. Marc Costa of Columbia Sportfishing in Orleans, Massachusetts told MassLive.com that this all went down about three miles west of Great Island in Wellfleet.

Check out this crazy moment when everyone aboard that fishing boat came face to face with a great shark that very nearly found itself crashing into the stern:

“We have just gone out and got two fish on,” Costa said. “Bringing the fish in, you can see what happened. That animal came up and grabbed the fish, right there. Right in our faces. It was pretty cool.”

The captain also told MassLive that he saw something similar happen 10 days ago but it happened 70-feet from the boat and the great white was a lot larger than the one in this clip.

Cape Cod is home to thousands and thousands of seals during the Summer who show up to layout in the sun and feast on easy-to-catch fish. This is primarily what draws in the great white sharks in such huge numbers. Everyone’s traveling to wherever the easiest meal is and right now it seems to be Cape Cod.

What does this mean for you as a swimmer? Not a whole lot, unless you’re going out of your way to look like a seal in the Cape Cod waters you should be A-Okay.

For more on this, you can check out the story on Fox News.