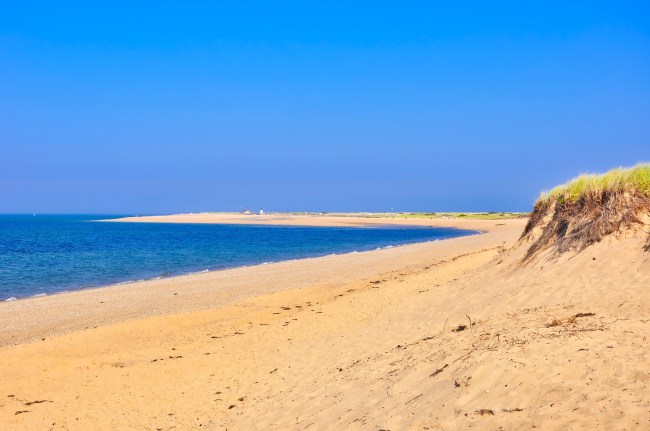 Sharks are awesome from afar. Encountering sharks in the wild is a once-in-a-lifetime thrill for some people and even people who regularly see sharks in the wild feel excitement when they come across the apex predators going about their business. Being in the presence of such skilled hunters can be humbling.

Do you know when it’s not super chill to see sharks? When you’re chilling on the beach and that shark is just 10-feet away from you. That’s not really the ideal setting for encountering a shark, especially not a Great White Shark. That sort of encounter plays tricks on your mind and it’s something you don’t easily forget.

Beachgoers ‘near Race Point Beach in Provincetown’ were treated to this close-up encounter with a Great White Shark literally 10-feet off the shoreline. Cape Cod is home to A LOT of Great White Shark sightings and encounters in the Summer but it’s still extremely rare to see behavior like this from such a massive shark.

Any number of possibilities could explain what brought that shark so close to the beach. There could be a sand ridge there that pushes baitfish up close to the shore and makes for an easy meal for the shark but it’s meandering along so peacefully it’s hard to believe the shark is in hunting mode at all.

The lack of a strong current might explain the behavior. Without a strong current to swim against the shark wouldn’t have to burn as much energy as it would in fast-moving water. I’ve also read theories about how Great White Sharks enjoy swimming amongst the waves because the churned up water has elevated oxygen levels but that’s just something I’ve seen in articles over the years and it’s never had any accompanying science to back it up.

What’s interesting is this is actually a pretty busy spot for seals but the seals usually go running off into the water when they’re spooked by noise, people, and animals. This day was different, according to For The Win:

“The morning started calm, quiet and overcast,” McKenzie wrote on Facebook. “Often the seals hang by the shore, but today was different. The dogs and screaming kids couldn’t spook them off. A good friend Peter said, ‘They are not moving because there’s a shark out there.’”
Sure enough, an hour later a great white shark made its presence known to beach-goers, its dorsal fin rising above the water line.
In the video you can hear a girl’s voice shout, “Don’t go in the water!”
“Pretty amazing!” McKenzie wrote. “And no injuries! It was quite a sight to see!”

The woman who filmed the video estimated the Greate White Shark was around 14-feet-long and about 4-feet-wide. Take one moment to look around the room you’re sitting in and think of what a 14′ x 4′ shark would look like and just how gargantuan that creature would seem up close.

I think the major takeaway here is you should always pay attention to the seal’s behavior. If the seals look scared and won’t go in the water then there’s probably a very good reason why.